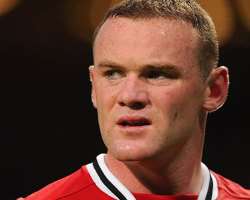 Victory for United would put them in pole position to top Group C, but they could now be without their talisman.

The England striker played the entire game against Swansea on Saturday and had been expected to start against the Portuguese league runners-up.

United would not comment on fears Rooney would miss the game, but Sir Alex Ferguson is likely to be quizzed on the issue at Monday afternoon's press conference.

He could have been in contention to start with Rio Ferdinand usually not playing two games in quick succession.

Chris Smalling and Danny Welbeck, who both missed the trip to Wales with injury, trained away from the main session and Ferguson had hinted Smalling could be fit for Tuesday's game.

One positive for United fans was Patrice Evra as the defender trained normally with the group after shaking off a virus.