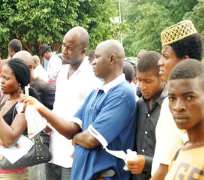 A remarkable gift that democracy has bestowed on Nigerians in the last ten years is the ease with which every one both in and out of government is talking. Talking has become one big industry so much so that the productive sector or the real economy of Nigeria has virtually collapsed under the heavy weight of too much talk and less action.

In the government circle, public funds running to several billions of Naira are spent annually in organizing talk shops where cheap talks become the order of the day.

In the Nigerian budget calendar, the third quarter has become notorious as a period when ministries and departments of both the Federal and state governments witness unusual harvest or bazaar of talk shops which are avenues for top government officials to engage in siphoning of huge unspent funds that ought to have been used to provide useful services to the public in the critical sectors of health, education and road infrastructure which have all but collapsed under the tremendous weight of corruption, lack of maintenance culture and poor supervision.

A sickening aspect of all these is that even the critical sector of education which should depend more on practical enlightenment and empowerment of the millions of disadvantaged Nigerian youths in useful skills and relevant vocations has been converted into one huge talk industry so much so that the two cabinet ministers who ought to enforce educational policies and programs to stimulate useful learning by our youths have all but become experts in empty rhetoric and guest lecturers at different talk shops staged by agencies under the sick ministry of education of Nigeria.

Talk is so very cheap in Nigeria that while President Goodluck Ebele Azikiwe Jonathan, the nation’s Army and police Chiefs are busy issuing empty verbal threats to members of the dreaded armed and very effective religious extremist groups in the North East of Nigeria, the members of these armed insurgency groups are busy detonating bombs and carrying out successful targeted assassinations of certain persons they consider as their enemies.

To compound our bewilderment, even industrialists and owners of the very few functional manufacturing firms in Nigeria have joined the big party of talkative people and are inundating Nigerians with different cheap talks on how they intend to create employment for the millions of unemployed Nigerian youths who have graduated from different tertiary educational institutions and are wandering in the streets of major cities of the country searching for the elusive white collar jobs.

The cheap talk about creating employment opportunities for Nigerians was taken to a new height when the combined forces of ministries of Finance, Youth and the central Bank of Nigeria came together yet in another good-for-nothing talk shop in Abuja to inaugurate what they called Youth’s job creation scheme otherwise known as ‘You Win’.

Nigerian government officials do the talking about employment opportunities and how to create them for the youths while serious countries like Germany and the United Kingdom are busy designing and pragmatically implementing wholistic remedial measures to give employment opportunities and deliver life long skills to the youths of those civilized countries.

We will return to the above measures by Germany and the United Kingdom on how they are tackling unemployment but first let’s see how the talk industry in Nigeria is booming.

I undertook two weeks of Contents’ analysis of four newspapers in Nigeria on the specific theme of employment and what I discovered is that the empty talks by government and key players in the private sector concerning this very important theme has assumed larger-than-life dimension and has become frenetic.

For instance, The Guardian edition of November 15th 2011 has close to one dozen stories regarding empty talks about employment creation in Nigeria as told by government officials and their affiliates in the private sector including the near moribund manufacturers Association of Nigeria.

Then on November 16th 2011, the grandfather of all empty talks on employment creation in Nigeria emanated from the Government funded National Bureau of statistics which told Nigerians that the rate of unemployment and inflation is on the rise in the country but quickly contradicted itself when it stated dubiously that the Gross National Product (GDP) warmed upward but stated that the upward movement of the gross national product was at snail’s speed in the third quarter (Q3) of 2011.

The Nigeria’s Bureau of statistics stated thus: “The unemployment rate…in the first half of 2011 increased to 23.9 per cent…This represents an increase of 1.8 million additional unemployed people between December 2010 and June 2011”.

The Bureau attributed the rise in the ranks of the nation’s unemployed to fresh entrants to the job market and worker layoffs across all sectors of the economy in the course of the year.

While we keep talking and spending our scarce resources in organizing talk shops on modalities for creating employment for Nigerian youths, the German and British governments have turned to apprenticeship schemes for the youth in functional firms as one viable solution to the unprecedented rate of unemployment among their younger citizens.

On November 16th 2011, sky news covered a story of how companies in Germany are implementing effective apprenticeships scheme as one way to reduce unemployment rate among young Germans.

They spend two days a week at school and three in the workplace.

Bela Frankenburg is one of them, and he explained how it improves his long term job prospects. His words; “here (in the warehouse) we have the pro-active part, we already have the material in our hands. Then we have the theory in the school where we learn the details.”

The reason apprenticeship schemes work so well in Germany is because the companies themselves are as keen to be involved as anyone.

The United Kingdom has followed the German model and the British Premier Mr. David Cameron is expected to roll out measures to implement the apprenticeship scheme for the unemployed British youths that only toped the one million mark in November this year.

That apprenticeship schemes are working in Germany and Britain as effective employment creation strategy is a major challenge for Nigeria which is also used to the informal practice of apprenticeship schemes especially by small scale Igbo traders who for decades have trained and settled hundreds of thousands of youths who are related to them and who individually spend an average of five years before the ‘masters’ settle them with small take off funds.

The question is why the Federal ministry of Trade and investments; the Bank of Industry; the Central Bank of Nigeria and the Federal Ministry of education have not jointly worked out implementable strategy for the resuscitation of the apprenticeship schemes whereby small scale entrepreneurs and manufacturers will be awarded bail out funds to kick start viable productive activities whereby unemployed youths would be engaged as part time apprentices even as they are awarded educational scholarship so that they can both be academically and vocationally empowered?

Important industrial areas like Nnewi, Onitsha in Anambra state, Kano state and Aba in Abia state can be used as experimental grounds and the schemes should be managed by established tested and trusted statesmen and women drawn from all segments of the Nigerian society.