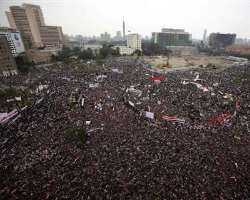 About 50,000 mainly Islamist protesters flocked to Cairo's Tahrir Square on Friday to press Egypt's military rulers to transfer power to elected civilians after the cabinet launched a move to exempt the army from parliamentary oversight.

The protesters chanted Islamic songs before Friday prayers while others handed out flyers demanding the withdrawal of the constitutional proposal and that presidential elections be held no later than April 2012, instead of at year end or in 2013.

"Does the government want to humiliate the people? The people revolted against Mubarak and they will revolt against the constitution they want to impose on us!" a member of an orthodox Islamic Salafi group cried out over loudspeakers.

"Down to military rule" and "No to making the army a state above the state" were some of the chants echoing across Tahrir.

A military source said on Friday the army would hand power to a civilian government in 2012, without giving a exact date.

Except for the preponderance of bearded men and veiled women typical of strict Islamists, the mass rally recalled the 18-day, largely secular uprising centered in Tahrir that toppled autocratic President Hosni Mubarak on February 11.

A parliamentary election set for November 28 could be disrupted if political parties and the government fail to resolve a row over the proposal that would deny parliamentary oversight of the army, potentially allowing it to defy an elected government.

Over 39 political parties and groups said in a joint statement they would rally "to protect democracy and the transfer of power" after negotiations broke down between Islamist groups and the cabinet.

Deputy Prime Minister Ali al-Silmi showed a constitutional draft to political groups earlier this month which would give the army exclusive authority over its internal affairs and budget.

Salafi parties and movements who follow strict Islamic teachings were the earliest to galvanize support for the Friday protest, with the Muslim Brotherhood and a number of liberal parties following suit.

Thousands of Salafi protesters arrived in Cairo from different parts of the country, many waving flags and singing the national anthem while youth groups guarded entrances to the square to prevent thugs from slipping through.

"We came by bus from the Nile Delta. We have been called to come and show our refusal of army rule and support of civilian rule," said Mohamed Ali, a member of the Salafi Al-Asalah party.

ANTI-MILITARY RALLIES ACROSS EGYPT
In the port city of Alexandria, thousands of Islamists and youth groups also held a rally and planned to head to a military base in a show of protest against the army.

"We went down to demand change but they removed Mubarak and brought the Field Marshal," protesters in Alexandria chanted, referring to Mubarak's former defense minister who now heads the military council that is supposed to guide Egypt to democracy.

Thousands also gathered in the Northern Sinai and Upper Egypt regions to protest but they called for an Islamic state, not a civilian state, the demand of protesters in the capital and Alexandria.

Despite Friday's street outcry against the army, many ordinary Egyptians feel their country needs the military command to preside firmly over the transitional period.

Despite the unified call against the ruling generals, Tahrir square was split between the Muslim Brotherhood's Freedom and Justice Party and their harder-line Salafi rivals, represented by several political parties.

The two set up separate sound stages and organised their own speeches and chants, only joining forces for Friday prayers.

"Our aims are one but there are differences between us as Islamist groups," said Abdullah Galil, a Salafi youth.

Liberal and leftist parties were also marching to Tahrir to take part in the rally. "There is no alternative but a return to the demands of the revolution which we must put back on track through a unified political voice," Mohamed Anis, co-founder of the liberal mainstream Justice Party, said.