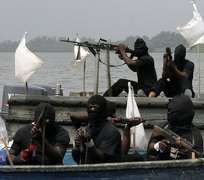 A private security official, who spoke to The Associated Press on condition of anonymity as details about the kidnapping remained closely held, said those abducted were foreigners. Glaubitz declined to identify those kidnapped, citing the San Ramon, Calif.-based company’s security rules.

“The safety of our employees and contractors is our first priority,” Glaubitz said. “Chevron Nigerian Ltd. is the assisting the service company to ensure the safe release of the kidnapped crew members.”

Glaubitz said the ship belonged to contractor Edison Chouest Offshore, based in Galliano, Louisiana. The company did not immediately respond to a request for comment Friday.

A Nigerian navy spokesman did not immediately respond to a request for comment.

Foreign firms have pumped oil out of Nigeria’s Niger Delta for more than 50 years. Despite the billions flowing into the nation’s government, many in the delta remain desperately poor, living in polluted waters without access to proper medical care, education or work.

In 2006, militants started a wave of attacks targeting foreign oil companies, including bombing their pipelines, kidnapping their workers and fighting with security forces. That violence waned in 2009 with a government-sponsored amnesty program promising ex-fighters monthly payments and job training. However, few in the delta have seen the promised benefits.

The kidnapping comes after Exxon Mobil Corp. has seen other contract workers kidnapped in recent weeks. Analysts warn the attacks may signify a fraying of the amnesty deal.

Meanwhile, attacks on crude oil tankers continue to rise around Nigeria, as pirates take over vessels to steal the crude oil from their holds.

The Agbami field is Nigeria’s biggest offshore oil producer, with a production capacity of as many as 250,000 barrels a day, Chevron has said. The attack on the field, so far offshore, indicates even the deepest-water oil finds remain susceptible to attacks from Nigeria.

Nigeria, an OPEC member nation producing about 2.4 million of crude oil a day, is a top supplier to the U.S.