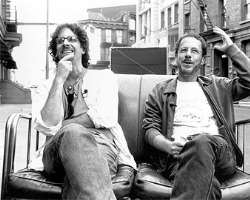 Coen Brothers and the making of Blood Simple.
(as told to Stephen Lowenstein)

Ethan and Joel Coen have put together some of the most fascinating and memorable films since making their debut in 1984. Last year, they won an OSCAR for 'No country for old men.' Before that, they were most famous for 'FARGO' and the cult favorite 'The Big Lebowski.' But everyone of their films were special.

To achieve success while playing OUTSIDE the Hollywood studios is what made Coens very admirable filmmakers.

Coens write, produce, direct, and even edit their own movies, often on a reasonably low budget so that they won't be hostage to Hollywood. A filmmakers' dream.

Here are excerpts from an interview with very useful insights on how they got their start with BLOOD SIMPLE.”- Taken from the book 'My First Movie' – by Stephen Lowenstein. Penguin Press.

“There are other people like Scorcese for whom FILM seemed like a religion from an early age. It certainly wasn't that with either of us. ” EC says.

JC calls attending film school a casual interest following the path of least resistance.
“I think film schools are quite different now from when I went. First of all, a lot of people on the undergraduate programme weren't really that interested in movies,” JC says.

LESSON NO 1: SET OUT TO FOLLOW YOUR PASSION, NOT A FILMMAKING CAREER.
On writing Blood Simple, which often described as convulated and intricate plot.
“We start at the begining and work through to the end. IT was just scene by scene. Sometimes writing yourself into a corner means there is no way out and you just have to bag the whole thing. But sometimes writing yourself into a corner means that you have to think of a way out of the corner.” JC says.

— LESSON NO 2: WRITERS SHOULD BE BULLHEADED.
on their strategy for FINANCING FILM:
They made a THRILLER of the movie. The tHRILLER emphasized action, blood and guts. It was short but with an effective soundtrack, which is cheap to do. And they took that around for about 1 year to people's homes and raised the funds.
Their target was to raise $750,000 for the movie. They started shooting once they got up to $550,000. They raised money in New York, Minneapolis and Texas. It ended up being about sixty-five investors in the movie, most of them in five-or ten-thousand-dollar increments. I think sixty to seventy percent of them were from Minneapolis.

“The thing is when you are trying to attract someone who might invest, you have this legal prospectus which is really dry. It's a document that's basically warning them off the investment, presenting all the risks. ” EC said.
JC says: If you call up people and you say “Can you give me 10 minutes so I can present an opportunity to invest in a movie? ” they are going to say “No I don't need this” and hang up the phone.
But it's slightly different if you call up and say “Can I come over and take ten minutes and show you a piece of film?” That gets your foot in the door.

The people who gave them money? Not professional people, by and large. They were small business people, entrepreneurs and who had started small business themselves.
JC: the interesting thing that we learned in retrospect is that with this kind of high-risk speculative investment, it's fine if you never make a dime because everybody who goes into it is quite savvy from a risk-reward point of view.

“They didn't understand how a movie that's gotten all this attention but didn't seem to make a huge amount of money.”

Ethan admit that they were taking a mad gamble. It was something a lot more easier for them to do because they didn't have kids then and financial responsibilities.

“People who were making a lot of money doing commercials or videos, a year or a year and a half into the process that we went through, they're factoring in all the income they've lost. We weren't doing that.”

LESSON 3: DOING FILM IS MORE ABOUT RAISING MONEY THAN MAKING MONEY.
On MAKING the film.
Coens used first timers crew for the entire film and everyone was nervous, including actress Frances McDormand. No one with exception of a few had been on a feature film. This way, they could extend the shoot to a longer period of 8 weeks as labor cost for inexperienced but skilled crew were cheaper. They used Barry Sonnenfield, who later made MEN IN BLACK and became a famous director himself.
“The first thing we did was hire a LINE PRODUCER. He put the movie together from a nuts and bolts point of view.” JC.

Coens believed in lots of pre-production work. After they write a script, they get a regular artist collaborator to STORYBOARD the whole shoot in detail. They do this to minimize budget.

Coens called shooting a movie another form of MONOMANIA, same like raising funds. YOU just stick to a one-track mind and do it. You have to.

“We didn't have this weird artsy attitude that it has to be perfect or whatever.” EC says.

The film took a while to edit because “no one was waiting for it” and they had to reshoot quite a few set ups. Luckily, this could be done within an apartment with one actor, limiting budget.

“So we shot stuff over the nine months or so that we were cutting the movie — we plugged it in.” JC said.

LESSON 4: MAKING A FILM IS HARD WORK AND AIM TO FINISH, NOT PERFECTION. HOWEVER, PRE-PRODUCTION – DEFINITELY HELPS.

On making a living:
EC worked as a temporary clerical typist, while writing Blood Simple. They were in poverty and lived on $15 a day while making the film. They didn't pay themselves salaries for writing, directing and producing the movie.
They paid themselves $200 a week for EDITING the movie.

LESSON NO 5: BE PREPARED TO BE VERY POOR.

distribution :
After finishing the movie, the COENS took it to Los Angeles and showed it to the major studios.

“It wasn't like now, where there's seven hundred movies in various stages of completion trying to get into Sundance. If you went out to LA and said, “I got a finished movie,' anybody would look at it.” JC. (there are 4,000 films submited to Cannes every year by the way.)

They were REJECTED by all major studios. Orion were willing to distribute but made it clear that they would only pay up to $250,000. — a major loss for Coens.
So Coens got some money by selling to foreign sales agent.
“Crown International Pictures say if you have some nudity you can put in there maybe we can distribute it. We saw everybody from the studios to the lowliest sleaze-bucket distributors in LA and they all said no.” JC said.
“Trouble was, it was a little too artsy for the sleaze studios and a little too sleazy for the majors,” EC said.

How did the FILM end up getting a distributor?

saved by FILM FESTIVALS. it got accepted into New York Film Festival and it got shown in Toronto.
“Ben Barenholtz saw it in Toronto,” JC said.
Barenholtz had a company, Circle Films, which could distribute outside of mainstream Hollywood.

“They said, look, none of us know what film's going to do. But we'll structure a deal such that if it makes money we'll all make money. It was personal and small and that just seemed right.” JC said.

— The movie didn't quite find an audience. As a an exploitation movie, it failed abysmally. Its only success was an art-house picture.
But what helped was the CRITICAL REACTION.

it was being written about in all these national magazines, you know, Newsweek, The New York Times, big articles.

“It was because of the fuss the press made of it that it was considered successful. You actually look at the numbers, they're fairly small,” JC said.
Warner Brothers which had passed on it, went to Circle and tried to buy the movie back.

“They were reading the reviews and thought, all right, we made a mistake.”

The critical reviews meant that they could get a SECOND FILM made and the original investors felt screwed and used.
How do you feel about the movie now?

“Its crude, there's no getting around it.” EC says.
“It's a movie that I have a certain affection for. But I think it's pretty damn bad!” JC says.

LESSON NO 6: NOBODY KNOWS ANYTHING IN HOLLYWOOD. WIN CRITICS OVER, GET INTO FILM FESTS IF YOU EVER HOPE TO GET YOUR MONEY BACK.

my own thoughts on this:
Coens started out with a strong passion, without which a film, a good film can NEVER BE MADE.
They had sensible economic and finance sense, and used their creativity to RAISE MONEY. They could also live with being poor for many years as struggling artists or the film would never complete.

They learned the NUTS and BOLTS and had full creative control from writing the story to producing, directing and finalizing the film as editors.

It helped that they were under no pressure to put out a half-baked film — passive investors, not summer blockbuster-driven studio finance. (They took eight weeks to film and nine months to edit and also took time in pre-production.) — a labor of love.

The film was flawed — it was between arthouse and exploitation — so no ready market for it. But COENS again were obviously clever commercially. They got into film festivals and found a distributor and turned critical reviews in their favor. — this is NOT easy to do as it may sound.

There must have been a lot of lobbying on their part, to make money back for the investors. For as they say, even the sleaziest distributors who distributed crap didn't want their film.

” its a mad venture that paid off because they had talent to start with but talent alone would not have got them so far. Hard work and strong commercial sense with a bit of luck thrown in.

Plus, this was in 1984 ” when FILMMAKING was not as competitive as it is now.

Thousands of films are following the film festival route to fame and many also know how to exploit the press and woo reviews. Even HOLLYWOOD has taken this route. Independent filmmaking has EXPLODED. see youtube.