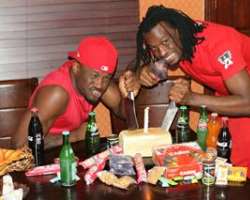 Their success story in the Nigerian music industry started in 2001 when they won the “Grab the mic” competition after which their debut album title last nite was released. Barely 3months after the release of their debut, they got nominated as “Most Promising African Group Kora Awards and won the 2003 Amen Awards for “Best R&B Group”.

In 2005, Psquare released their second album title Get Squared and produced mindblowing videos that held #1 position on the MTV Base Chart for weeks.

The group has performed alongside international artiste like Akon, SeanPaul , Ginuwine etc

In 2007, they release Game Over album which sold 8million copies world wide after which they followed it up with Danger album in 2009,and Invasion album in 2011 making it their fifth studio album which also came out to be a hit.