GOMBE: AN INFLUX OF JOSTLERS FOR DEPUTY GOVERNOR 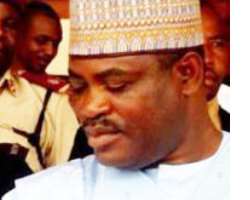 By John Bulus
Almost six months into his stewardship of Gombe State, Governor Ibrahim Dakwambo is yet to form a cabinet. His problems have now been compounded by the death of his deputy, David Abashi.

THE reality that nature abhors a vacuum is not lost on the political stakeholders in Gombe State. It was as such not surprising that barely a week after the internment of the late Deputy Governor of the State, Mr. David Miyims Albashi, that permutations on his succession is now the subject of political whispering in the state.

Abashi died in a German hospital on November 4, 2011 apparently as a result of critical injuries sustained from a ghastly auto crash in Gombe on Sunday, August 28, 2011.

Geopolitical consideration
The process of replacing the deceased Governor is constitutionally the responsibility of the Governor who has to submit his nomination to the State House of Assembly for approval.

Given the geopolitical configuration of the state it is expected that the Governor would focus his choice on the Gombe South Senatorial zone made up of four Local Government Areas. Remarkably, speculations on the choice of the Governor is now focused on seven potential nominees.

The Gombe South Senatorial Zone where the choice is focused on has Biliri, Balanga, Shongom and Kaltungo local government areas. Presently, the most favoured of the four areas is Biliri which has not produced a deputy governor since the return of democracy in 1999.

Late David Abashi.
Indeed there were expectations before the last election that the slot of deputy governorship would be given to the area. However, clandestine political out-maneuverings and internal bickering among the elites in the area seemingly emanating from speculations on the interests of the Chairman of the Council, Mr. Rabenson Wasa, who was apparently the choice of the power brokers in the State made the area to lose the chance.

Consequently, both the PDP and Dankwambo retraced their steps to Balanga to pick a deputy in the person of Mr. David Albashi notwithstanding the fact that Dr. John Lazarus Yoriyo who deputized Governor Danjuma Goje for 8 years also hailed from the same Local Government area.

Whatever were the losses of Biliri were assuaged by some strategic appointments made or promoted by Governor Dankwambo.

Among the compensatory appointments channeled to the area are those of the new Head of Service, Mr. Eli Akeme and the Special Adviser to President Goodluck Jonathan, Mrs. Sara Pane who are both from Biliri. The implication of this development in the opinion of some is that Biliri has been duly represented in the political permutations.

They also posit that while Shongom and Kaltungo Local Government Areas have the House of Representatives and Senate seats at the National Assembly, it can also be politically fair and humanly justified to take the office back to Balanga who lost one of their own.

Deferment of ambitions
If that suggestion were to find root it would mean that all the jostlers from Biliri would have to defer their ambitions and allow Balanga to at least serve out the term. But even if the scenario eventually plays out, the race would not be won so easily by even the most favored from Balanga.

Sources say that there are factors being evaluated currently by the powers-that-be. The factors include tribal considerations among the people of the Local Government Area where two major tribes - the Cham and Waja- dominate the politics of the area.

While the odds may favour Cham community where the late deputy governor hailed from, the Wajas are kicking against the idea saying that the contest should be open to all. The Cham say that for 8 years, Dr. Lazarus Yoriyo who is Waja held-sway as deputy and as such that their own entitlement should not be broken.

If this works, the chances of the immediate past member of the House of Representatives, Hassan Ahmadu of getting the seat could disappear leaving the trio of Barrister Obel Yaji, Permanent Secretary, Cabinet Office, Government House, the state NBA Chairman, Mr. Caleb Ubale and member, representing Balanga South State Constituency in the State Assembly, Honlourable, Philp Solomon Jisima who hail from Cham Community to square up against each other in the race.

A look at their backgrounds gives lofty and almost equal chances to all of them. Barrister Yaji, noted for his quiet spirit may also be banking on his Government House connections networked over the years as the Permanent Secretary since the days of the Goje administration.

Barrister Ubale, a politician, has queued severally for the party's ticket in the primaries but hasn't been that lucky. He is currently working with the Senator representing the District, Barrister Joshua Lidani who was also a deputy governor in the State between 1999 and 2003.

A protÃ©gÃ© of the deceased deputy governor who is currently a member of the State House of Assembly, Mr. Philips Solomon Jisima on his part has the advantage of the robust support of his colleagues in the House of Assembly.

The reasoning is that with him in the Government House, not only would Dankwambo have gotten a dependable and technically resourceful deputy but the Governor will enjoy an unprecedented cordiality with the Legislative arm of Government.

Meanwhile, the Governor has allowed the speculations to blossom sidestepping the issue. A dependable Government House said it is too early to make noise about the replacement of the deputy governor, adding that the governor is still feeling distraught on the loss of his deputy.

The source, however, submitted that the Governor will not be in a hurry to appoint anyone just to fill the vacuum, also stressing that the governor will make some factors which include humility and competence amongst others his guide in making the choice of the successor of his late deputy.

Indeed, not a few persons hold this view especially in the light of the fact that the Governor is yet to form his cabinet 6 months after his inauguration as governor. Not even the verbal vituperations and stretched pressures have made the governor to cave in to the yearnings of the people in that direction.

But then, whether Dankwambo will make a choice from the names aforementioned and when that unfolds is a matter that is left with time.