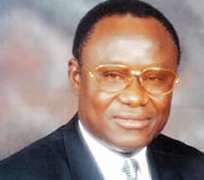 The confirmation of Mrs. Roli George, wife of the convicted former Deputy National Chairman, South West of the Peoples Democratic Party (PDP), Chief Bode George, as board member stirred some controversy as the three senators from Lagos State vehemently protested and opposed her approval insisting that she lacked the competence to represent the state at the commission. The three senators are from the opposition Action Congress of Nigeria (ACN).

The ACN Senators mounted pressures with some support from other opposition parties from the other side of the aisle, insisting that the upper chamber must reject her in line with Senate tradition that no nominee can be approved without the support from three Senators from his/her State.

Senator Gbenga Ashafa, ACN, Lagos East, who was the first to kick against the confirmation, told the Senate to reject the nomination adding that Lagos State Governor, Babatunde Fashola had forwarded a different nominee to President Goodluck Jonathan.

Senator Ashafa also pleaded with the Senate to apply the same rule used in rejecting the ministerial nomination from Taraba. But Senate President, Senator David Mark disagreed with Ashafa, saying a rejection can only be done on grounds of attitude or incompetence of the nominee. Mark also said the Senate was not aware of any correspondence from the President replacing Mrs. George, therefore cannot step down her nomination.

"We will stand by our colleague in this chamber but it must be based on proper facts. In the case of Taraba, it was the attitude of Obadiah. If the attitude of the individual is such that he has not come to respect the Senators, we will not confirm. If he is incompetent, we will also not confirm. In this particular case, that is not the point we are trying to establish," Mark stated.

Senator Ashafa in the company of Senator Oluremi Tinubu briefed journalists shortly after the confirmation. They said it was partisan for the Senators to have confirmed her. Ashafa said, "The governor of Lagos State in a letter written in September to the President had requested that the nominee for this all important Commission should be recommended by him on behalf of the state regardless of partisan politics. In a letter from the President, it was stated that the letter was acceded to but the list did not have the name the governor put forward.

"As such, the three Senators signed a letter of objection to the Committee in charge of the National Identity Card and Population Commission asking that the nomination from Lagos should be rejected. We feel very passionate about it because the work of the Commission requires somebody, who can deliver," he said.

Earlier in his contribution, Senator Musa Nagogo, CPC, Nasarawa North, urged Senators to adhere to the practices of rejecting nominees opposed by legislators from the state.

"In this chamber, a nominee from Taraba is a similar case and we gave our colleagues moral support. This is a voice for social justice. In view of the fact that our colleagues from Lagos have vehemently opposed the nomination of the nominee, I ask that the Senate in conformity with its practices, some of which have been recently adopted by this Chamber, do listen to their request", he said.

It rejected the nomination of Sir Nwakanma Chimaobi, Abia, who was considered to be too old for public service.