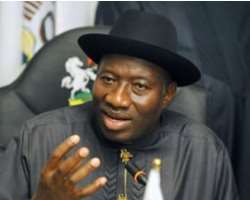 • Jonathan
Yesterday's meeting President Goodluck Jonathan held with members of the National Assembly to resolve the issue of the removal of fuel subsidy ended in a deadlock.

Sources at the meeting said though the president wanted the issue of fuel subsidy to dominate, the lawmakers insisted he addressed the issue of security.

'The president wanted the issue of fuel subsidy to dominate the meeting but we rejected it outright and we told him we will discuss at our executive session. But he brought us up to date with his efforts at tackling insecurity in the country. He assured us that a lot was being done and having listened to him, we promised to support him,' one of the members, who attended the meeting, spoke on condition of anonymity.

In the same vein, the lawmakers, who were led to the Villa by the Senate President, David Mark and Speaker House of Representatives, Aminu Tambuwal, described as scandalous media reports that they had attempted to pass a vote of no confidence on the administration of President Jonathan.

After a closed door meeting with Jonathan yesterday afternoon at the Banquet Hall of the State House, Chairman of the Senate Committe on Works, Senator Ayogu Eze (Enugu North Senatorial District), told State House correspondents that such issue (a vote of no confidence) was never discussed at the chambers of the Senate.

Asked what was discussed at the meeting, Eze said the issues bordered on the state of insecurity, fuel subsidy removal and general welfare of Nigerians.

According to him, the meeting was inconclusive, saying that they would continue to meet until a common ground was reached on the key issues. He further said the interest and welfare of Nigerians were key issues that were paramount.

'I want to let you know that this is a very useful exchange, very useful interaction and we hope at the end of the day it will produce desirable results for our people.' On what the President told them, Eze said: 'Well, a whole lot of issues, governance issue, we discussed security, subsidy and the issue of balancing the budget and just making sure that government works for the benefit of the people.'

Asked if both parties failed to understand each other, he replied: 'No, it will be premature to say that we have failed to understand ourselves. This is the first interaction, we have listened to him (president) and we are going to take it further.' On threat to pass vote of no confidence on the president, he said: 'That never came up at the chamber of the Senate, we were scandalised when we read about it this morning, such a matter was never discussed. But I can take you into confidence, a lot of our colleagues at the closed session were concerned about security issues in the country and about lives and property. And of course, it is not unusual for them to be worried about that.'

Asked the next date of the meeting, Eze said: 'There is no date yet but it is assumed that it is going to continue and I can see two or three more meetings before we can come to comfortable platform.' Also fielding questions from newsmen, the Special Adviser to President on National Assembly Matters, Senator Joy Emordi, said the interactions between the members of National Assembly was a demonstration of the president's commitment to consulting with them for a smooth governance.

Asked what President Jonathan wanted from the lawmakers she said: 'Mr. President saw everybody as leaders whereby the executive and legislature should join hands together to find solutions to few challenges facing our nation. It goes to show clear manifestation that Mr. President is not a dictator. He wanted to carry the legislative arm of government along in whatsoever decision he is going to make and that was why he requested for this interactive session and it is going to be a regular affair.'