I am diplomatic with men, says Vanessa Nzegwu 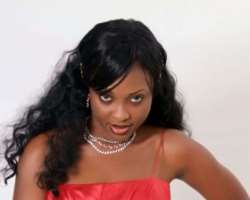 She's a self-taught visual artist and a screen goddess, who holds a lot of promise for her generation. Right from when she launched into the mainstream movie world some few years ago, Vanessa Nzegwu has not failed to become an actress to admire and watch on screen.

Since she started experimenting on canvass, Vanessa may not have abandoned her love for acting, as she admits that “acting is what I have loved to do in life.” In this encounter with HVP, this beautiful actress recounts her journey into the world of make-believe, what defines her relationships with the opposite sex, and her expectations in life.

When did you have your first movie?

I acted my first movie in 2003. I 've been in and out of the industry. I started from Kano before I moved to Enugu. I wanted to act and sometimes, the job doesn't come easily. And so, you have to try your hands in some other things.

But after awhile, I decided to come back to the industry to try my luck. In the past, I did some movies where some producers gave me roles that I did not like.

So, I turned them down but they said, 'oh! She's rude, she's this..or that…'. Why don't I just take a break since I' ve done something good before now?

How long was the break?

That was in 2004. I came back in 2005 to do a movie before I stayed off screen again for sometime. I wasn't back into Nollywood until recently.

You started out from Kano ….

Yes, I started from Kano but it was on stage. I can't exactly remember the name of that play that launched me into the world of acting. I just finished my secondary school education then, and found myself acting on stage. It didn't take me much time to venture into Nollywood.

From Kano, how did you break into Nollywood?

When I started on stage, there were some actors that were invited to Kano State to watch us perform on stage.

The likes of Sam Loco Efe and Tom Njamanze. After watching us on stage, they passed a remark, saying to me, “ You're good.

We are going to have productions in Enugu.” They invited me to join them, since according to them, I have all it takes to be an actress. I took time to think about it, before making up my mind to give it a trial.

As it were, I travelled to Enugu to launch out, and the very first day I arrived the Coal City, I got a role. For me, it was quite encouraging and I decided to stay. But then….

How did you get the role in Enugu?

I had to register as a member of the Actors Guild of Nigeria(AGN). I actually went to Enugu for registration.

But when I got there, it was the job that came calling. So, I said to myself 'what are you going back to do?

Why not just stay back, and get more jobs for yourself?' Because then, we had very few people who could be good in acting in Enugu. That was how I stayed back. I left Enugu for Lagos. The place appeared to be static for me.

There were no challenges coming my way. And the kind of roles that were given to me were not challenging as such.

I needed someone to challenge me; to make me stand up and face the realities of acting. I needed someone to tell me, “You need to do more than what you're doing,” and I felt I could have that here in Lagos. So, I moved down to Lagos, and so far I've been in Lagos and am still in Lagos.

In the movie you acted in, you're in love with the guy and along the line, you started feeling jealous. In real life situation, are you jealous?

The way I reacted there, even though it's a script, is something a whole lot of women would do, and even worse.

Some would even go to the extent of attacking their partner. But my character there wasn't that violent. So, I couldn't do more than what I was told to do. But then, as a person, I like being sincere to people. I think I will have time to think about what I did wrong or why he took that course of action.

Because for me to have accepted you as partner, you should be able to tell me what you can and cannot do. And if eventually you did it, and you're truly sincere and show remorse and no matter how you cry and say I don't love you, at the end of the day, you will still come back to that guy.

What do you think of yourself?

I think am someone God has created to set things right, to help the less-privileged, and in as much as I don't have the whole world, I try to do my best with the little I have.

What are your assets as a woman?

By assets, if you mean what I can make money with them, I will say my hands. Because without my hands, I cannot make money.

Considering the fact that you are a very beautiful woman, what can you say about the many men that come around you?

I try as much as possible to be down to earth with them. I try to make them comfortable but not too comfortable. And I try to let them know that this is how far I can go with them, unlike some people who will try to give in because there is no other way out. I try to be diplomatic about it.

Are into a relationship?

Is it one that will likely lead to marriage?

You don't predict what will happen. You just do your own part by finding someone who suits you and then you let God do the rest.

What do you look out for in a man?

I look out for naturalist. You just have to be natural. You have to be sensitive, and also, you have to be creative. When I mean creative, I mean being able to make out something out of nothing even when it looks like all hope is lost, you're able to put yourself together and say I have what it takes and I can make something out of this.

You are a good dancer.

So do you go to parties?

Yes, once in a while, I go to parties.

Have you ever broken somebody's heart before?

In a sense that after awhile, if you find out that it's not something that is leading you to the next level, you look for a way of ending it amicably. Both parties would decide and at the end of the day, you remain friends because you never can tell where you will meet yourselves again and what you can benefit from that person.

How do you describe the word, love?

To me, love is a gradual thing. Sometimes, you can see love as being stupid. You can also do stupid things for love. It's just doing something different from the normal things that you do.

Have you ever been disappointed by friends?

Yes. Most times, I 've been disappointed by friends.

Was it in a relationship?

In relationship, I would not say, I've had so many disappointments. Sometimes, we end up being friends. So, at the end of the day, nobody is hurt.

Where do you hope to see yourself in the next few years?

In the next few years, I see myself in the international scene and am working very hard towards it. And then, whatever is making those people better than us, I will be able to bring it back and make the industry a better one.

At the same time, I am hope to set the structure for the up and coming fine artists.