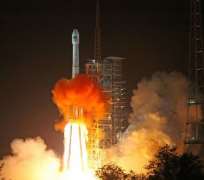 Russia's unsuccessful launch of a Mars moon probe points up the problems of a once-pioneering space industry struggling to recover after a generation of brain drain and crimped budgets.

An unmanned craft, launched last Wednesday in what was meant to be post-Soviet Russia's interplanetary debut, got stuck in Earth's orbit and may drop down into the atmosphere within days.

The failure rattled Russian space officials but came as no surprise to many industry veterans who saw the ambitious mission to bring back dirt from the Martian moon Phobos as a pipe dream.

Despite improved budgets and Prime Minister Vladimir Putin's pledge to restore pride in the sector, the Russian space industry is saddled the legacy of a lost generation of expertise, in many cases obsolete ground equipment and outdated Soviet-era designs.

It is plagued by the same corner cutting, decaying infrastructure and lack of effective quality control that are blamed for frequent disasters across Russia's industries, from coal mine and dam explosions to air crashes.

The Soviet Union began the space age over half a century ago by launching the satellite Sputnik, but Russia has been entirely absent from space beyond Earth's orbit for 20 years, while U.S. probes have voyaged into the farthest reaches of the solar system. Even newcomers India, China and Japan have sent unmanned missions to the moon and beyond.

Post-Soviet Russia's sole attempt to strike out to other planets ended in the spectacular breakup of its Mars-96 probe in the atmosphere in 1996.

Smarting from the crash, Russia withdrew from deep space for 15 years. The $165 million Phobos-Grunt probe, first conceived in the 1990s, was to be its comeback mission.

The troubles cap a humiliating string of costly botched launches that marred this year's celebration of the 50th anniversary of Yuri Gagarin's pioneering human space flight.

"It's very sad but it's a result of the difficult period we lived through in the 1990s. We are working almost from scratch," lead Phobos-Grunt mission scientist Alexander Zakharov said.

Since the U.S. space shuttles retired this summer, Russia's Soyuz are the only ships flying crews to the International Space Station (ISS), at a cost of about $350 million a year to NASA.

But Russia has nothing to be proud of in this, its new space agency chief told lawmakers last month in a gloomy speech outlining "deep" sector problems at the root of recent mishaps.

Moscow has over-prioritized human space flight, he said, and must shift focus back to deep-space exploration and Earth observation, offering greater science and technology returns.

While Russia carries out some 40 percent of global space launches, it held only 3 percent of the $267 billion dollar global space industry market in 2010, Popovkin said.

The industry's great weakness is electronics, crucial to a satellite's lifespan, said expert Rachel Villain of Euroconsult, a consultancy tracking the space sector for over 25 years.

"That's why they have such a big launch experience. In the '90s, their satellites lasted six months, compared to the United States' 10 years," she said.

"They had to keep launching new ones to replace them."

Now Russia mainly buys its electronics from Europe. Up to 80 percent of the equipment on its spacecraft is imported, former Roskosmos head Anatoly Perminov told state-run news agency RIA earlier this year.

BRAIN DRAIN
Years of low funding stripped the industry of a generation of talent, while salaries averaging 26,000 roubles ($850) a month fail to attract new blood.

"Before we didn't work for money but we were in the limelight, at the front lines of our country's pride," Soviet cosmonaut and engineer Georgy Grechko, 80, told Reuters.

"This is the generation that should be in the top management positions right now. We have a real lack of experience."

With the Soviet breakup, Moscow woke up to find the maker of its workhorse Zenit rocket in newly-independent Ukraine and its main launch facility in Kazakhastan. The new borders raised costs even as many small industry suppliers went belly up.

Roskosmos also lost an extensive network of ground tracking sites and fleet of telemetry ships, leaving Russian controllers to scramble to contact the wayward Phobos-Grunt only once an orbit when it passes over Russia. [ID:nL5E7MA01B]

The problems have clouded what were to be the space program's biggest triumphs this century.

Its reputation for commercial launches also took a hit with the loss this year of a $265 million, European-built communication satellite that was to service Russia for the next half decade.

Even Moscow's ability to guarantee space station operations was in doubt after it crashed a cargo flight bringing supplies to astronauts in orbit in August, delaying the launch of a new crew, now due to leave on Monday morning

The mishaps prompted Putin to order an overhaul of safety checks on Russian rockets and Roskosmos to announce the creation of an independent quality-control body.

Russia has boosted its budget for space by some 40 percent per year over the last five years, spending $5.5 billion in 2010, according to Euroconsult.

But veterans say the industry is lagging years behind.

"You need at least 10 years to rebuild everything."