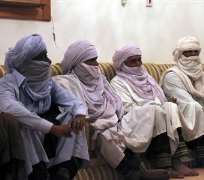 "Let us all speak frankly, the Tuareg were with Gaddafi," the revolutionary fighter spat across the table.

Ali Aghali, a Tuareg tribesman, calmly pulled his hands out from under his turquoise robe and placed them on the table. He made sure that the fighter had finished speaking.

"We are not Gaddafi supporters. Everyone was with Gaddafi before the war, we have left him," he said smiling with his eyes, his mouth covered by a pastel yellow head scarf.

The fighter, from the northwestern Libyan town of Zintan, interrupted: "They were."

Meeting in a compound that used to be Muammar Gaddafi's private retreat outside the desert town of Obari, Zintan fighters and a civil and military delegation from the capital of Tripoli are here to make sure the revolution has fully arrived.

Tensions are running high. Many Tuareg nomad tribes, who roam the southern Sahara desert spanning the borders of Libya and its neighbors, backed Gaddafi late into the war.

The Arab fighters of Zintan, on the other hand, pride themselves on the speed at which they turned on Gaddafi. Zintan brigades came here to fight loyalists of the late Libyan leader in June and some have stayed behind, saying they intend to disarm the Tuareg, mediate disputes and reconcile the region with the interim government in the north, the National Transitional Council (NTC).

Many look upon the nomads with suspicion.
"I've been sent from the Ministry of Defense to sort it out here," said one commander, accusing the Tuareg of fighting for Gaddafi and raping women in the northern cities of Misrata and Zawiya, where bloody battles raged during the civil war.

"I will fix it. We are from Zintan and we are real revolutionaries. We need to stay in control here," he added.

RECONCILIATION
The NTC faces the huge task of reconciling groups all over the country now that Gaddafi is gone after 42 years, and has sent delegations to sensitive areas around the country.

In towns around Libya, locals say people have been killed in raids by former rebel brigades seeking revenge against men they believed had fought on Gaddafi's side. There are fears of regional violence, especially in the previous Gaddafi stronghold towns of Sirte, Bani Walid and Sabha, only 200 km (125 miles) from Obari.

This region was one of the last bastions of Gaddafi in Libya and was only fully taken over by forces loyal to the NTC a month after he was toppled.

Many Tuareg backed Gaddafi because he supported their rebellion against the governments of Mali and Niger -- where there are large populations of Tuareg -- in the 1970s and later allowed more than 100,000 to settle in southern Libya.

The tribes are important to regional security because the Tuareg have huge influence in the vast, empty desert expanses which are often exploited by drug traffickers and Islamist militants as a safe haven for their operations.

Porous borders, discontent and availability of arms make this region one of the potential hot spots to present an armed challenge to the interim government.

BAD PRESS
The Tuareg say they are the victims of bad press, named as Gaddafi mercenaries because he used black Africans to fight in the north and accused of giving shelter to Gaddafi's family and his loyalists, a claim that many in the north uphold, including the prime minister of the interim government.

"There are still a lot of Gaddafi supporters in the desert, most are black people who speak Arabic. They thought if Gaddafi fell they would become slaves again. Life was very difficult before Gaddafi for them," said Aghali, who has come to meet the Zintani fighters and discuss what will happen next.

"But most Tuareg are not supporters of Gaddafi, we saw a lot of planes bringing mercenaries from African countries to fight in the north (during the war)," he said.

Aghali spent most of his life living just outside Gaddafi's walled villa and as a child used to play in the fields on which the compound was built in 1990.

He went into the actual compound for the first time only a few days ago, and now he sits drinking tea at the dining room table, surrounded by Gaddafi's expensive glassware.

"Most Gaddafi supporters (here) are staying in their houses and a lot try to join the revolution. Now, slowly, life will become good," he said.

The Tuareg tribesmen are a blur of flowing robes in Gaddafi's living room as they discuss their qualms with the country's new rulers.

Although the region does have second and third generation Zintani inhabitants, many of the fighters came during the war and act like an occupying force -- armed to the hilt and patrolling the streets in convoys.

A Tuareg man was recently shot dead by a Zintani, but few are willing to speak of details and mediations are held behind closed doors -- tribal feuds can spiral into further violence, they say.

"One man was walking in the street and revolutionaries shot him," said Ahmed Matu, a Tuareg mediator from Obari, a town of around 400,000 people filled with impoverished migrants, many of them Tuareg from Mali, Niger and Chad.

Outside, the sprinklers had been turned back on and Matu sits in a room full of chandeliers. Most of the cabinets are empty -- the villa was clearly rarely used but is now covered in revolutionary graffiti and guarded by fighters in pickup trucks.

UNDERLYING TENSION
At a college in central Obari, the NTC Tripoli delegation has come to hold a "town hall" style meeting with around 200 Tuareg elders and some of the Zintani fighters.

"I should care about Libya, not only my village or myself," a representative of the NTC said over a microphone.

"A doctor from Obari is the same as a doctor from Tripoli or Benghazi," he added, to the crowd's cheers.

Both the Zintanis and the Tuareg want to give the impression that progress is being made and laugh and joke together, but the mood becomes tense at times.

Tuareg were given the chance to express their grievances.

One man said that he had cars stolen and another demanded that imprisoned Tuareg who fought for Gaddafi in Zintan would be released.

An NTC military commander said the prisoners would be released after the Muslim festival of Eid al-Adha this week, but from the depths of a crowd of Zintanis one fighter shouted out, "They have blood on their hands. The Tuareg signed an agreement with Gaddafi."

The room erupted with shouting as the Tuareg tried to refute the claim, desperate to appear to be cooperating. The Tuareg fear reprisals and during the meeting tribesmen try to portray themselves as victims too.

"We got nothing from Gaddafi," one elder cried to roars of applause. In towns around Libya, locals say people had been killed in raids by former rebel brigades seeking revenge against men they believed had fought on Gaddafi's side.

AFRAID OF A SPARK
Members of the NTC Tripoli delegation make some progress but still leave feeling battered and exhausted.

"We'll have to come back," said a member of the military delegation.

"First we need to solve the personal dispute then we need to put the people here on the right course. We need to get all the guns. We need to open the schools. Because you know the revolution came later here. Some of the southern villagers do not even know that there was a revolution," he sighed.

Mossa Elkony, a Tuareg representative to the NTC, says the war has left "psychological wounds that demand a focus on reconciliation."

"I hope that Tuareg can restore confidence that has been lost. Unfortunately, they have been involved in this war," he said, just before boarding a military transport aircraft back to the capital. "This makes haters against the Tuareg. We are afraid of a spark. We need to get rid of it at the beginning because it could become a roaring fire."