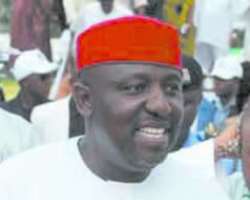 Ahead of today's ruling by the Imo State Governorship Election Petitions Tribunal, in a case challenging Governor Rochas Okorocha's victory in the governorship election, tension has gripped residents and people of the state.

The Peoples Democratic Party (PDP) had, shortly after the declaration of the election's results, filed a petition against Okorocha of All Progressives Grand Alliance (APGA) and the Independent National Electoral Commission (INEC).

The PDP prayed the tribunal to nullify the May 6, 2011 supplementary election that gave Okorocha victory and declare the winner based on the inconclusive April 26, 2011 governorship poll results. According to the party, INEC has no power to cancel elections.

Saturday Sun gathered that APGA, in its briefs, contended that the petition lacked competence, as the petitioner did not sign it. The party argued that INEC has power to cancel elections and urged the tribunal to discuss the case before it.

The INEC, on its part, dismissed the argument of PDP, saying that the law empowered it to cancel elections.

Following the nature of the case, there's palpable tension in Owerri, the state's capital and other major cities in the state. Both supporters of APGA and PDP are optimistic that victory will come their way.

Saturday Sun noticed the presence of riot policemen at some strategic locations in Owerri.