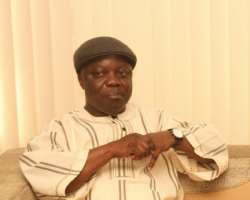 … DPP Heads For Appeal Court
ASABA, November 11, (THEWILL) - The Election Petition Tribunal hearing the petition over the April 26, 2011 governorship election in Delta State Thursday in Asaba upheld the election of Dr. Emmanuel Uduaghan as the governor, having scored the highest number of legitimate votes cast during the election.

Chief Great Ogboru of the Democratic People’s Party (DPP) had approached the tribunal, headed by Justice Joy Uwana on October 24, 2011, asking it to declare him winner in the April 26 governorship election in Delta State, saying Dr. Emmanuel Uduaghan of the PDP was not duly elected as the governor not having polled the highest number of votes cast at the gubernatorial election.

Ogboru also alleged that election did not hold in six local government areas of the state as, such the election was inconclusive.

The final figures…. that the second respondent ( Uduaghan) also has no less than one quarter of all the votes cast in at least all the two third of all the local government areas in Delta state. Consequently we hold that the petition fails and is accordingly dismissed.

“Finally, we hold that the return of the first respondent, Dr. Emmanuel Eweta Udaughan as the governor of Delta State in the April 26 2011 election was lawful and is hereby affirmed having polled a total of 422,509 votes against Ogboru who scored 410,550 in re-computed figures of the affected local government areas.

She said the re-computation of all the results in the local government areas by the tribunal alter the original result as announced by INEC.

Justice Uwana further stated that sections 145 and 167 of the Evidence Act 2010 does not allow for the admissibility of evidence from forensic experts to prove the irregularity of the elections and result as the petitioner has not been able to discharge the burden of prove that there was irregularity in the election and the subsequent result, as the burden of proof should not be shifted to the respondents

She said as the Tribunal has the adjudicatory functions to cancel unlawful votes, it follows that upon the calculation, the remaining votes must be computed and the candidate who scored the highest number of lawful votes declared the winner.

She also stated that the Tribunal rejected and refused to admit some of the evidence from the Petitioner’s party agents because they were not polling unit agents, adding that the Tribunal also did not admit the errors of INEC as Section 155 of the Evidence Act 2010 validate or invalidate errors from INEC.

Counsel to Uduaghan, Mr. Ken Mozie, while speaking on the judgment as delivered by the Tribunal said the manner and way the tribunal approached the suit was initially turbulent but thanked the judge for the dispatch with which they dealt with the suit, saying, “We hope this is the last tribunal we will attend.”

Chairman, DPP Delta State, Chief Tony Ezeagwu, hailed the judgment but stated that it will be challenged at the Court of Appeal as there are issues that still need to be addressed.