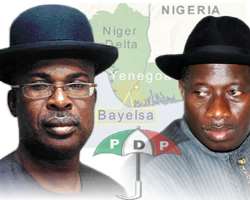 SAN FRANCISCO, November 10, (THEWILL) – President Goodluck Jonathan and the leadership of the Peoples Democratic Party (PDP) may have been boxed into a corner in their bid to stop Bayelsa State Governor Timipre Sylva from participating in the Bayelsa State PDP governorship primary following the pro-Sylva position taken by Nigerian State Governors elected on the platform of the party and some Bayelsa legislators serving in the National Assembly.

The PDP governors Thursday mandated a 5-man committee to pressure President Jonathan and the PDP to clear Sylva to participate in the primary slated for November 19, 2011.

Making the position of the governors public at the Presidential Villa today, Benue State Governor, Mr. Gabriel Suswam said governors are backing Sylva because allowing the party drop Sylva would be setting a precedence that could affect any of them in the future.

“Naturally, he (Sylva) is our colleague and we expect that we all go together and so, it’s a game of self-preservation anyway. We take ourselves as governors and we expect that what affects one governor indirectly affects the others as well,” Suswam stated reinforcing the governors’ stand on the matter.

The governors have met with President Jonathan severally in order to get clearance for Sylva. But their efforts did not sway Jonathan.

Jonathan and Sylva, both from Bayelsa State have maintain a cordial relationship until recently when Sylva threatened to kill him and his wife Patience if he is stopped from seeking reelection on the platform of the party.

In the same vein, seven federal legislators from Bayelsa State have said the National Working Committee (NWC) of the PDP has no business screening and clearing aspirants for party’s primaries. They posited that following the party’s constitution, only the State Gubernatorial Screening Committee, which has already issued Sylva a certificate to participate in the primary, could screen aspirants.

In the letter according to The Guardian, the seven legislators in the National Assembly warned that excluding Sylva from the primary could cost the party the state in future elections.

“That the screening and clearance of candidates for governorship primary election is the exclusive function of the Gubernatorial Screening Committee set up pursuant to Article 17.1 of the PDP and paragraph 16 of the Electoral Guidelines for Primary 2010. That in this case, the Screening Committee duly empanelled is the one led by Brig. Gen. Idi Adamu (rtd), which screened the aspirants in accordance with its mandate last October 27 at the PDP Zonal Office.”

Two other high profile aspirants -- the former Special Assistant to the President on Niger Delta Affairs and former NDDC managing Director, Mr. Timi Alaibe, and former Director-General of the Nigerian Television Authority (NTA) and owner of Silverbird Group, Mr. Ben Murray Bruce, are also awaiting the decision of the NWC.