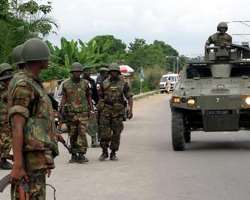 A violent Islamist sect responsible for scores of killings in northeast Nigeria is increasingly linking up with global jihadist movements like al Qaeda, a military commander in the area told Reuters on Monday.

Lieutenant Colonel Hassan Mohammed, a senior military official in the Joint Military Task Force (JTF), was speaking at a government house at the end of dusty track in Maiduguri, the heartland of the Boko Haram insurgency.

"Boko Haram is al Qaeda," he said.
"I see perfect links. It cuts across boundaries. Al Qaeda has no boundary, Boko Haram has no boundary. All terrorists, one problem," said Mohammed, dressed in camouflage and flanked by armed soldiers.

Many analysts and Nigerians doubt the extent to which Boko Haram has global ambitions -- the group's avowed aim is to introduce Sharia across Nigeria -- but it seems to be growing in sophistication and it is thought they have made contact with al Qaeda's north African affiliate.

They are becoming a growing security headache for president Goodluck Jonathan, who on Thursday tried to assure investors at an economic summit in the capital it would be short lived.

"Anybody who doesn't want to come and invest in Nigeria now because of these incidents of Boko Haram will really regret it because this is very temporary," he said.

The sect claimed responsibility for multiple gun and bomb attacks that killed 65 people in and around the city of Damaturu on Friday in its deadliest attack yet, which left bodies littering the streets and reduced police stations, churches and mosques to smouldering rubble.

The attacks followed multiple bomb blasts earlier the same day in nearby Maiduguri, including a triple suicide bombing of a military headquarters and three roadside bombs, all shortly after Friday prayers, according to the military.

POROUS BORDERS
Nigeria's remote northeast, on the threshold of the rocky Sahel, borders several other African countries, including Cameroon, Chad and Niger, the latter having its own problems with the Sahara-based al Qaeda in the Islamic Magreb.

Mohammed suggested these porous borders were making it easy for militants on either side to move in and out of Maiduguri, a rubble-strewn city of boarded-up shops and soldiers gripping Ak-47s nervously behind sandbagged sniper positions.

"Maiduguri has been a harbour for people from Chad, from Niger, from Cameroon. Now ... the people they have invited have now become a source of terror," he said, agitatedly, declining to sit down during the whole interview.

Nigeria's police said on Tuesday they had arrested some suspected militants behind Friday's violence, and last week were searching door to door for weapons.

"I can tell you many people have been co-operating with us and we have collected many arms," Mohammed said, as two soldiers kept guard. "Maiduguri is no longer a safe haven."

Nigerian security forces have been criticised for failing to prevent attacks, but Mohammed insisted the military was "on top of the situation".

Efforts to fight Boko Haram in the past have achieved little and heavy-handed police tactics in the northeast have radicalised youths against the state.

"I must admit the sometimes men exhibit some excesses, but ... We have handed over people to the police who will be prosecuted," Mohammed said.

In a sign the insurgency has spread beyond the northeast, a bomb attack on the Nigeria headquarters of the United Nations in the capital Abuja in August killed 26 people. Security experts said it bore the hall marks of an al Qaeda-style strike.