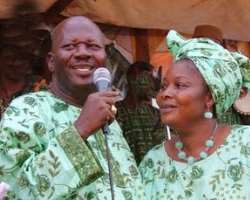 The Association of Nigeria Theatre Arts Practitioners (ANTP) has described the sudden death of Moladun Kenkelewu, the wife of Babatunde Omidana (Baba Suwe) as an unfortunate incident.

The leadership of ANTP has, however, prayed against the recurrence of such incident in its fold.

According to the Association's National President, Prince Jide Kosoko, the news of Moladun's death is quite shocking and unfortunate.

“She was one of the best actresses that we have. The industry and Nigeria as a whole will miss her. It is sad because I'm still recovering from the loss of Remi Abiola when this happened,” Kosoko said.

“Unfortunately, both Maladun and Remi were close to me and their contribution to the development of Nollywood cannot be quantified. May their souls rest in peace,” he stated