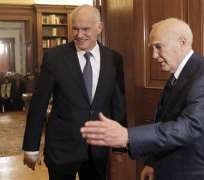 Greek Prime Minister George Papandreou said he was stepping down on Wednesday without naming his successor as the nation heads toward an economic precipice, but party sources said political leaders had agreed it would be the speaker of parliament.

Parties from left and right settled on veteran socialist Filippos Petsalnikos, barring last-minute snags, the sources said, turning to their own political class after ditching a plan to recruit a former top European Central Bank official.

Greeks and the nation's international lenders have watched in growing horror for three days as party leaders feuded over a shrinking list of credible candidates to lead a national unity coalition after Papandreou's government imploded.

Greece will run out of money next month unless the new government comes to terms with the European Union and International Monetary Fund, Greece's last remaining lenders.

In a television address before heading to meet the president, Papandreou wished the new prime minister well without giving any name and declared that Greece had avoided bankruptcy -- even though Greeks are pulling their savings out of local banks due to the political turmoil.

Papandreou also said the new government would win approval for Greece's 130 billion euro bailout deal and secure the nation's membership of the euro zone despite its crisis.

"I am proud that, despite the difficulties, we avoided bankruptcy and ensured the country stayed on its feet," he said. "I want to wish the new prime minister success, I will support the new effort with all my strength.

"Today, despite our differences -- political and social differences do exist -- we have put aside our fruitless conflict and disagreement," Papandreou said.

TAKE NOTHING FOR GRANTED
It was left to the party sources to give Greeks some idea of who their leader will be until early elections are held in February. They named speaker Filippos Petsalnikos, 60, who founded the PASOK party in 1974 along with Papandreou's late father Andreas, Greece's first socialist prime minister.

However, they warned against taking anything for granted.

"We have agreed on Petsalnikos but things can change between now and when the prime minister sees the president," a source close to the discussions between PASOK and the conservative opposition New Democracy told Reuters on condition of anonymity.

Earlier optimistic reports proved premature as the parties bickered over who should take the poisoned chalice and lead a government that will impose yet more crippling financial austerity on an angry electorate.

Some Greeks had put their faith in a plan for Lucas Papademos, a former vice-president of the European Central Bank, to head the new government as a technocrat and give it the credibility that politicians lost long ago.

But that idea stalled in the small hours, apparently over politicians' refusal to let Papademos pick his own team to tackle Greece's overwhelming debt and budget problems.

With Greeks and the European Union clamoring for an end to the game of political cat-and-mouse, the central bank governor earlier made a rare intervention to say a new coalition was imperative for securing the euro zone bailout.

"Political uncertainty has added to the stress facing the economy and the banking system," Bank of Greece Governor George Provopoulos said in a statement.

"Any delay in forming a new government threatens to damage further the country's credibility."

GREEKS WANT EUROS -- IN CASH
Greeks have pulled their savings from banks over the past week because of the deepening political crisis and fear of an exit from the euro, banking sources said. [nL6E7M94KI]

They withdrew as much as 5 billion euros -- nearly 3 percent of total deposits -- after Papandreou's shock call last week for a referendum on the euro zone bailout, said one banker, who declined to be named.

"Many people withdrew their money from banks on Thursday and Friday and money couriers had a hard time supplying banks with cash to satisfy the emergency demand," said another banking source, who also requested anonymity.

Papandreou provoked uproar with the plan, due to the likelihood voters would have rejected the package, pushing Greece into bankruptcy and casting doubt on its future in the euro. Under intense pressure from home and abroad, Papandreou backed down but was forced to make way for the unity coalition.

Many wealthy Greeks moved their money into foreign banks last year as the crisis deepened. Now other people are demanding sometimes large amounts in euro banknotes, fearing that any bank savings might be converted into devalued new drachma if Greece is forced to revert to its national currency.