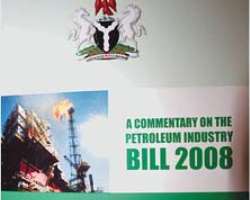 By Inalegwu Shaibu
A source disclosed to Vanguard that the committee had met with some oil majors in the upstream sector that include Shell, Agip and Total before the Wednesday November, 2 Senate recess.

ABUJA-Senate has started meetings with major stakeholders in the oil industry towards ensuring the eventual passage of the Petroleum Industry Bill, PIB, that was dumped by the last National Assembly.

The targets also include removing the secrecy that surrounds the operations of the oil majors and government agencies as well as bring down cost of doing business in the industry.

Chairman of the committee, Senator Emmanuel Paulker who spoke to Vanguard on the issue however did not confirm the meetings.

But he however added that it was the mandate of the Committee to ensure the removal of high cost of business in the sector, as well as ensuring that operators comply with government policies within the sector.

He further noted that Senate is determined to remove the secrecy attached to operations in the nation's oil sector.

According to him: 'Let me state a major issue which our committee shall pay serious attention to. The issue of industry cost. My committee is aware that over time, the cost of doing business in our petroleum industry has grown to become one of the highest around the whole world'.

'This is in spite of the fact that the factor often cited to justify such higher costs is no longer in existence.

'The committee is aware that the industry is traditionally considered to be opaque, secretive and guarded. This is so especially with regard to the operations of the policy and regulatory agencies as well as even major oil companies both foreign and indigenous.

'I will, therefore, urge everyone charged with regulatory, policy or operational responsibility to cooperate fully with this committee in the discharge of its functions.

'Let us wave goodbye to hide and seek, to disobedience to lawful requests for information and invitations and to such other irritable attitudes that often generate rancour and acrimony.'

'Let me state categorically that unlike any other time, the Nigerian petroleum industry is presently at a crossroad. As the backbone of the Nigerian economy, the industry is expected to not only generate the vast proportion of government revenue through the provision of adequate power supply and employment of our teeming population of youths.

'However, the challenges facing the industry today are enormous. Some of them are: widespread uncertainty about the state of the ongoing reforms in the industry with the non-passage of the PIB; slow-down of investment in virtually all aspects of the industry; impediments to the vigorous implementation of the Nigerian Content Act; low growth of our oil and gas reserves; confusion surrounding the renewal of leases held by some oil companies; problems surrounding divestment of assets to Nigerian companies as well as environmental and community issues.

'All these constitute major challenges to the smooth operation of the industry and the delivery of expected dividends to our country.'