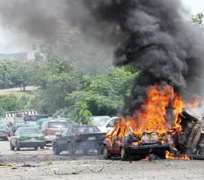 Three bomb blasts and gunfire shook the Nigerian city of Maiduguri on Friday, where an Islamist sect is engaged in a campaign of violence against local authorities, witnesses and military sources said.

One blast was at the El-Kanemi College of Islamic Theology around the time of Friday prayers.

A local security source said it was not yet clear if there were any casualties.

Security forces this week started door-to-door searches for weapons in northeast Borno state after an arms amnesty for Islamist militants expired on Oct. 31. It was unclear if the bombings were a response to that operation.

Boko Haram says it wants Sharia law more widely imposed across Nigeria. It draws much of its support from unemployed youths in the remote, economically deprived north.

The group claimed responsibility for a deadly bombing on the United Nations' headquarters in the capital Abuja in August.