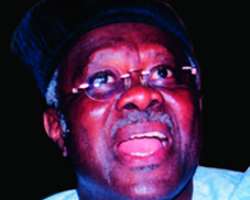 Bode George
Activities at the Mobolaji Bank Anthony Way, in Ikeja, Lagos State, came to a temporary halt yesterday as former national deputy chairman of the Peoples Democratic Party (PDP), Chief Olabode George led members of the party in the state on a street protest. The party was protesting the outcome of the October 22 local government election in the state.

Though the Action Congress of Nigeria (ACN) was declared winner in all the 57 local council areas in the state, the PDP claimed it won the election in five local government areas and over 200 wards against 18 wards declared in its favour by the Lagos State Independent Electoral Commission (LASIEC).

The protest, which started from the party secretariat at Ikeja, went through major streets, terminating at the ever-busy Maryland. He told party faithful that the PDP performed very well in the election only to be denied their victory by LASIEC in collusion with leaders of the ACN.

George vowed that the party would stop at nothing to regain the mandate given to it by the people of the state in the local government election.

According to him, the protest was necessary to show the grievances of the party over the conduct of the election. Addressing a crowd of party supporters, he berated the ruling ACN in the state and its leaders, who he accused of supplanting his party at the polls, saying they would come to ruin soon.

His words: 'When they claim they are democrats, all the people of Lagos can now see that they are cheats. Where are all the Falanas and Rotimi Akeredolus. People held an election, voted for people of their choices. What you did with Baba Adeyinka, apart from being deplorable, is nonsensical, very idiotic. How would a man, who was employed by the Lagos State Judiciary succumb to announcing results without the figures?'

Where is that done in any part of the civilised world. These guys have taken us on a jolly good ride. People have shown that it is possible… right in Ikoyi where he lives, he lost woefully. Why can't he accept that it is over? Lagosians have had enough.

'This mandate, we will demand it. We first of all have rejected all those kitchen cabinet that he has put into the electoral panel. They are all his own people. Even the retired Justice Akinsanya. We knew where they belonged. We will not accept it, unless we have an independent set of people, proven, PDP will not accept it.

Maybe, Fashola was too young to remember what happened in the old western region. 'It was the twisting of the peoples' will that led to Wetie; that led to the farmers- Agbekoya and that led eventually to the civil war. They should tell these clowns that this is not the time for this rubbish.

The PDP leader had earlier sought and got the nod of the General Assembly of the party which met before protest to empower the state exco of the party to sanctioned members of the party working against its interest. ired naval officer also did not spare some party members who accused of working in tandem with the opposition against the PDP and stated that they too will co

Speaking at a General Assembly of the party, which preceded the protest, the state chairman of the party, Mr. Setonji Koshedo maintained that the strive to address the injustices done to the party in the local council election. However, he said the hope of the party lies in the judiciary.

'We will follow the courts to fight this injustice. We will make this injustice clear to the whole world. The people will fight for democracy. But if the people fails too stop them, God will stop them. Even those in ACN will suffer for the evils they have done,' he added.