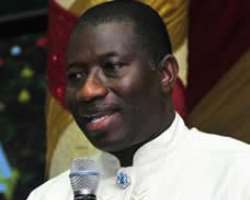 The Presidential Election Tribunal threw out its petition as lacking in merit and substance.

But in a swift reaction, the CPC condemned the judgment and vowed to challenge it at the Supreme Court. Specifically, in a unanimous judgment, the five-man panel held that the party has failed woefully to prove that the election was marred by irregularities and not conducted in substantial compliance of the relevant provisions of the Electoral Act.

Relying substantially on the relevant provisions of the Evidence Act 2011 (as amended), Chairman of the tribunal, Justice Kumai Bang Akaahs who delivered the lead judgment, held that 'the onus of non-compliance lies with the petitioner to establish. It is after it has established non-compliance that the onus will shift to the respondents.'

It was the decision of the tribunal that 'a party seeking nullification of an election can only succeed on the strength of its own evidence before the court as allegations of non-compliance must be grave and substantial to affect the majority of votes cast.

'The law as it stands, the onus of proof rests on the shoulders of the petitioner to go ahead and prove that non-compliance substantially affected the outcome of the election.'

Justice Akaahs added: 'The petition can only succeed if it was established by the petitioner that some people were disenfranchised or he could have secured a number of votes and won the election if the process was not manipulated against him and his supporters.'

It was the reasoning of the tribunal that 'from whichever angle this petition is viewed, the petitioner did not prove his case and discharge the burden of proof even on the balance of probability.'

On allegations that President Jonathan deployed soldiers to harass opponents and restrict movement in the Federal Capital Territory (FCT) as a ploy to tamper with election materials to take undue advantage, the tribunal said such allegations were unfounded.

Justice Akaahs noted that the CPC petition suffered a major setback when the evidence of its National Chairman, Prince Tony Momoh, which was the spectrum of the petition was expunged from the records of the court following a mix-up by his legal team.

He explained that by law, the Independent National Electoral Commission (INEC) has no powers to release its bio-metric data base, as doing so would expose the secrecy of the voters.

The tribunal also expunged the allegations made against military officers and other security personnel by the CPC on the grounds that they were not parties before the tribunal.

On allegations that excess ballot papers were printed by Tulip Press, a local company and distributed to Bayelsa, Zamfara, Kwara, Sokoto and other states to inflate votes in favour of Jonathan, the tribunal said the allegations amounted to hear-say evidence as there was no iota of evidence to support it.

The tribunal further held that no evidence were laid before the court to establish allegations of substantial non-compliance with the relevant provisions of the Electoral Act in all the 14 states where the petitioner is contesting the result of the presidential election.

Overall, it was the decision of the tribunal that 'the result of the April 16, 2011 presidential election is not successfully challenged.Consequently, President Goodluck Jonathan and Architect Namadi Sambo won the election and are returned as duly elected president and vice president.

Justices Mohammed Garba, M.A Owoade; Igwe Agube and Obande Ogbuinya all agreed with the lead judgment to the effect that the entire petition lacked merit and it was accordingly dismissed.

Those in court for the judgment on the side of the CPC were Prince Tony Momoh, Mallam Nasir el-Rufai (ex- FCT Minister), Alhaji Buba Galadinma, Osita Nwachukwu and other chieftains of the party.

The ruling PDP was represented in court by the Minister of Labour and Productivity, Emeka Wogu, Professor Rufai Ahmed Alkali, National Publicity Secretary of the PDP and Senator Isiah Balat, the Chief of Staff to the vice president among others.

Speaking after the judgment the National Chairman of CPC, Tony Momoh who condemned the findings of the tribunal expressed the readiness of the party to challenge the decision at the Supreme Court.

However, an elated Professor Alkali said the tribunal has done justice on the petition. 'Today is a great day as the tribunal has dismissed the CPC petition by an unanimous decision. The Tribunal held that the burden of proof lies with the CPC to prove that the election was invalid. We are very happy because we went round the entire country during our campaign and we got our reward for it…Today, we have been vindicated that we won the election and we have a solid case to win even at the Supreme Court.'