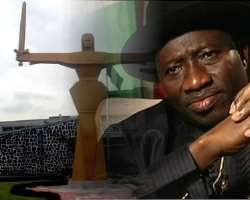 SAN FRANCISCO, November 01, (THEWILL) - President Goodluck Ebele Jonathan has welcomed the judgment of the Presidential Election Petition Tribunal, delivered today in Abuja at the Court of Appeal, which upheld his election as President of the Federal Republic of Nigeria.


The President in a statement signed by his Special Adviser (Media and Publicity), Dr. Reuben Abati, described the judgment as a triumph for democracy and an affirmation of the sovereignty of the Nigerian people.


He praised the Congress for Progressive Change (CPC) and its Presidential Candidate, General Muhammadu Buhari, for their respect for the rule of law and the Constitution, saying their recourse to judicial review of their grievances affirms their faith in the nation’s judiciary.


Extending the hands of fellowship to the CPC and General Buhari, the President called on them to accept the decision of the tribunal, put the past behind them and support his administration’s efforts to transform the nation.


“From this day, let us move forward together as we work to deepen the democratic content of our polity and build a nation of our collective desire,” the President said, adding, “The judgment of the Presidential Election Petition Tribunal is a victory for all Nigerians”.


President Jonathan expressed his appreciation to all Nigerians for their steadfastness and support, stating “the resolve of his administration to continue to provide good governance, anchored on the strong foundations of honesty, transparency, hardwork and fairness to all.”

Meanwhile, former Vice President Atiku Abubakar has advocated that future constitution amendment should take into cognizance the resolution of all election matters before swearing in of elected public officers particularly the office of the President.

The former Vice President made the suggestion in a congratulatory message to President Goodluck Jonathan in Abuja yesterday.

He hailed the verdict of the Presidential Election Tribunal noting that it has paved the way for the delivery of the much needed dividends of democracy by President Jonathan and the ruling Peoples Democratic Party (PDP).

Atiku advised that the envisaged constitution amendment should design a strategy for disposing of all election matters before swearing in as was suggested by the Justice Mohammed Uwais-led Electoral Review Committee.

“It is imperative that all election related court cases be disposed of before winners are sworn in. This is to remove any impediments to the delivery of dividends of democracy to the people,” Atiku said.

He urged President Jonathan to see the reaffirmation of his mandate by the court as an opportunity to implement his transformation agenda in a way and manner that will be beneficial to ordinary Nigerians.

In a unanimous judgment delivered by Tribunal Chairman, Justice Kumai Akaahs, the five member tribunal panel agreed that the CPC failed to prove allegations of electoral irregularities in the 20 states where it claimed the PDP rigged in connivance with electoral officials. The CPC claimed its candidate, General Muhammadu Buhari scored the highest votes and therefore should be declared winner of the poll. The justices however saw things differently and dismissed the CPC’s petition in its intirety for lacking in merit.

The Tribunal subsequently affirmed the victory of Jonathan saying that the poll was conducted in strict compliance with the Electoral Act 2010 and that he (Jonathan) scored majority of the lawful votes as declared by the electoral commission.

The CPC through its National Chairman, Prince Tony Momoh has said it would appeal the judgement at the Supreme Court.