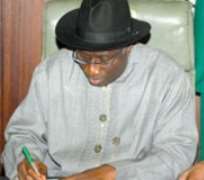 Jonathan loses bid to stop CPC petition
THE Presidential Election Petition Tribunal in Abuja will today deliver its verdict on whether or not President Goodluck Jonathan validly won the April 16, 2011 Presidential election following the petition brought by the Congress for Progressive Change (CPC) challenging the result.

In a notice to counsel in the petition obtained by The Guardian, the tribunal is scheduled to deliver judgment on the matter at 9 am.

Jonathan, candidate of the Peoples Democratic Party (PDP) in the election, yesterday failed in his bid to terminate the petition as the Supreme Court in Abuja refused his appeal against the decision of the Tribunal to hear it, having been filed on a Sunday, deemed as public holiday.

In his verdict, Justice Walter Onnoghen, who led five other Justices, held that the appeal was neither relevant nor a live issue since the petition had been heard and slated for judgment.

Onnonghen held that the panel also took judicial notice of the non-compliance with the 60 days set aside by law within which the appeal must be heard after the decision of the Court of Appeal sitting as the Presidential Tribunal.

The suspended President of the Court of Appeal, Justice Ayo Isa Salami, had on July 14, 2011 held that section 150(1) of the evidence act provides for presumption of regularities as such filing of the petition on Sunday does not vitiate it particularly as it was filed within the stipulated deadline.

President Jonathan, the PDP and the Independent National Electoral Commission (INEC) had jointly challenged the July 6 decision of the tribunal, which upheld the filing of the CPC's petition on a Sunday.

The tribunal had on October 20 wound up its sitting in the CPC petition.

While adopting his final address at the last hearing of the matter, counsel to the CPC, Oladipo Okpeseyi (SAN) had told the court that he filed a preliminary objection against the defendants' written addresses to the effect that the INEC abandoned its pleading having not called witnesses to substantiate them.

He said INEC had called only three witnesses out of the 36 states of the federation and the Federal Capital Territory and as such, had abandoned its defence. Okpeseyi submitted that INEC has not made any defence before the tribunal to defend Jonathan's victory.

'We submit that the confusion epitomizes what we are saying about INEC and that is why we have asked them to bring those documents which it used in conducting the presidential election to court,' he said and urged the court to nullify the election.

Wole Olanipekun (SAN), counsel to Jonathan and Vice President Namadi Sambo, in his final address said the tribunal had refused to grant relief six, which sought for conduct of a fresh presidential election on the ground that the CPC candidate was not a party to the petition.

Olanipekun added that notwithstanding that evidence has been taken on the petition, the hearing amounts to a mere academic exercise. He consequently urged the court to dismiss the petition which he noted has been abandoned.

In his submission before adopting his address, Counsel to INEC, Adegboyega Awomolo (SAN) said: 'A party is supposed to rely on evidence presented before court and also authorities cited. But in this case, the petitioners tendered evidence documents that belong to INEC.

'These are documents that are meant to support INEC and its Chairman, Prof. Attahiru Jega's position that the election was conducted in full compliance with the Electoral Act 2010'. He therefore asked the court to dismiss the petition.

Gen. Muhammadu Buhari, who had stormed the tribunal alongside his running mate, Tunde Bakare, CPC chairman, Prince Tony Momoh and the party's National Secretary, Buba Galadima among other party faithful, told journalists after the court session that he was in court as a member of the political party.

Before CPC filed the petition, Buhari was reported as saying that he would not go to court to challenge PDP's victory but when he was spotted in court among his party loyalists, journalists confronted him on the issue and he replied: 'I have never distanced myself from the CPC petition. I am part of the party and subscribed to the petition. I have confidence in the judiciary.'

Author of this article: From Lemmy Ughegbe, Abuja