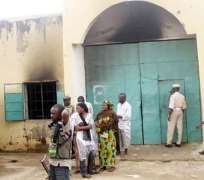 ABUJA, October 31, (THEWILL) - The Nigerian Prisons Service on Monday disclosed that it spends about N3.53 billion annually on the feeding of prison inmates in the country. The Controller General of Prisons Biodun Ogundipe gave the data at a public hearing organised by the Senate.

He also told the Senate Committee on Judiciary and Human Rights, which organized the hearing that Nigeria has 49,000 prisoners, out of which 38,000 are awaiting trial persons.

Ogundipe’s submission was before the public hearing on the bill to amend the Transfer of Convicted Offenders Act to make it possible for Nigerians serving various jail sentences outside the country to be brought home to complete their sentences.

According to him, the nation’s prisons possessed the capacity to receive the incoming inmates from abroad, as the congestion of prisons was an urban phenomenon.

He said most of the prisons in the urban centres were far overstretched, while those in the rural areas were receiving inmates far below their capacities.

“We have the capacity to hold convicted prisoners, the problem we have is with the awaiting trial inmates,” he said.

Members of the committee raised questions on the condition of the nation’s prisons, arguing that bringing in additional prisoners from abroad could compound the problems of inmates.

Asked what it takes to feed prisoners, Ogundipe said the service was spending N200 to feed a prisoner on a daily basis.

Although committee was shocked with disbelief, he explained that the N200 per prisoner per day was a recent improvement on the feeding of inmates, noting that hitherto, the situation was worse.

A bill seeking to give effect to the Commonwealth scheme on convicted offenders was almost killed on the floor of the Senate last Tuesday, but sailed through after a controversial ruling by the President of the Senate, Senator David Mark.

The bill, titled a Bill for an Act to amend the Transfer of Convicted Offenders Act CAP. T19, LFN 2004, seeks to remove from the principal Act the need for the consent of the convicted offender before they could be transferred to a different municipal jurisdiction to serve out their sentences.

The bill is to give effect to the Commonwealth scheme on the convicted offenders between Commonwealth countries and seeks to amend the provisions of the extant Act by removing the consent and verification procedure of returning convicted prisoners to serve out their term in Nigeria.

The amendment is to simply delete Sections 5(1)(d) and 8 which deal with the consent and verification of the convicted offender.

Another controversial clause inserted in the bill is that the administering country, such as Nigeria, will not have the power to review the cases for which the offenders were convicted or grant them pardon without the express permission of the country where they were convicted.

Ogundipe disagreed with that provision, saying that it would not be right for Nigeria to seek the permission of the country of conviction if she finds a good ground to pardon or grant amnesty to the offenders.

He also suggested that the prisoners that should qualify for transfers should have committed offences that were offences in Nigeria.

Meanwhile, a civil society activist, Mr. Max Banite, who appeared before the committee said the policy was anti-people and a breach of the fundamental rights of the people.

He argued that deleting of the clause which allows the prisoners’ consent in the transfer, was also a violation of the rights of the individual.

He argued that Nigeria was a signatory to the Vienna Convention which has as a fundamental principle, the right of consent by prisoners to be transferred.