GUS 8: THE MIGHTY ARE FALLING IN OSOSO! 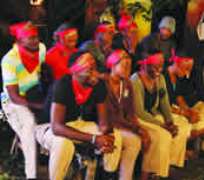 GUS Contestants
The battle for the winners of 'Batch B' in the Gulder Ultimate Search is getting intense by the day. With the eviction of Mary-Wealth Ohwonda, Ibitoye Kikelomo Adewunmi, and Goodluck Ohio from the forest of Ososo in Edo State, things seem to be looking up for the male contestants. Not even Goodluck, the mobile policeman popularly called 'Understanding Mopol' by his campmates could withstand the rigours of the jungle.

Unlike in Batch A where three men and just one woman were evicted at this stage, there appears to be a more spirited competition from the male folks in Batch B. Currently, both sexes are tied with respect to the number of evictees. Two men, Kenneth and Goodluck, have been evicted so far while the same number of women (Mary-Wealth and Kikelomo), have suffered the same fate. Indeed, the Batch B trio of Goodluck, Mary-Wealth, and Kikelomo will be sorely missed by their campmates as they joined Kenneth Iheme, first contestant to be evicted, while awaiting their fate before the voting audience.

Road to eviction
For the three evictees, the road to eviction was not palatable. In the case of Goodluck, nothing gave a premonition to the disaster that awaited him that morning. The fact that the contenders could not light a fire to prepare the food Tony won in the first task did little to dampen their spirits. After spirited attempts to light the fire ended in failure, they went to bed hungry, tired but optimistic. At least they had a dry night compared to the previous night when the rains exposed their flimsy shelter. In the dead of the night, Anthony Igwe, obviously unable to bear the pangs of hunger, sneaked out of bed to steal some garri from the general supply. The next day, the contenders decided to spend the day wisely by improving on their shelter while awaiting the coming task. At a point, Tony stumbled upon a tree of unripe oranges, which the entire team descended on. Anything to subdue the hunger would be fine, as they devoured the oranges like wounded lions.

Challenging times
Under Darey's watchful eyes, each of the contestants was required to walk from one tree stump to another, using a log of wood. After successfully walking on the tree stumps, they would then run through the forest avoiding obstacles of rocks, tree trunks among others, until they got to 10 discs arranged in a particular order. Each disc had symbols painted on them.

They were to memorize the arrangement of the disc and run back to the starting point, using the log as usual across the stumps to the starting point. They were required to replicate the arrangement of the discs with a set of new discs provided for them. Falling off from the log of wood would mean going back to the starting line. Failure to replicate the discs in the precise order of their arrangement would also mean going back again to the original arrangement of the disc. It was a task that tested the contenders' speed, mental alertness, memory and balance. Not surprising, none of the contenders could complete the task in the first try. Christopher correctly arranged his discs on his second attempt and emerged as the winner of the task. He got the much sought after box of matches for his efforts. Tony was the second to complete the task. Sandra was next to finish up followed by Kikelomo, Mary-Wealth, Chigozie, and Anthony, in that order. It became a straight fight between Goodluck and Theodora but the youth corps member beat the mobile policeman by arranging her discs correctly before Goodluck. The police officer fell off his log repeatedly and had to return to the starting point on three occasions. He was evicted on the spot.

Flaring temper
However, it was not all a rosy affair as tempers rose following the confession of Tony Igwe that he stole part of the garri meant for the contenders. It was left to his namesake, Tony Horsfall to pronounce judgment on the self-confessed garri thief: a reduced portion of the next meal. But then, the task of the day proved to be even more physical than the one before it. The contenders were each required to put 15 oranges into basketball-like nets hanging on tall poles. Getting the oranges proved to be the major obstacle in the challenge as they had to cross a stream sloping downwards to fetch the oranges and then cross the stream back again in order to put the oranges into the basket. It did not help that the contestants had to cross down a slippery and sloppy stream to get to the oranges. Climbing back up slowed down the contestants. That was not all. They had to go under and over wooden barriers before crawling under a cargo net. Only after surmounting the aforementioned could they 'net' their ball.

Action time
The contestants bolted to action following Darey's signal. As their baskets filled up following trips to retrieve the oranges, the contestants' strength began to diminish. Soon their movements were limited to huffing and puffing along. Horsfall's basket got the 15 oranges mark, making him the first contestant to complete the task. This would be the second task he would be winning after he won the very first task of Batch B. Christopher, who started brightly ended up as second followed by Igwe. Sandra was the first lady to complete the task. Theodora was next, followed by Chigozie. Kikelomo was the seventh person to finish while Mary ended up last. It was the end of the road for the two last contenders as they were evicted at the place of the talking drums.

Blame game
Goodluck blamed his loss on his erroneous impression that the tasks would require physical strength. 'I was not prepared for this kind of task. I was thinking that it would be more physical than this. I'm not happy at all about my poor performance,' he said.

Believing he has let down the Mobile Police community through his eviction, Goodluck begged for their understanding. 'I will send a message to my fellow MOPOL. They should not be annoyed with me. I'm begging them to please forgive me. It was a mind game and I didn't do so well,' he pleaded.