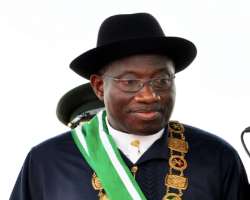 SAN FRANCISCO, October 29, (THEWILL) – Special Adviser to the President, Media and Publicity, Reuben Abati has said reports in some local media (THEWILL not included) credited to Australian newspaper, The Australian, that President Goodluck Ebele Jonathan was a no-show at a Commonwealth Heads of Government Meeting (CHOGM) forum in Perth, Australia is ‘mischievous’ and ‘entirely misleading.’

The Australian had reported in its October 28, 2011 online edition that Jonathan skipped two scheduled speeches at the weeklong CHOGM, without offering any formal explanation.

But Abati in a statement said, ‘The President was not scheduled to deliver speeches at two events on Thursday as claimed.’


“The truth is as follows: On Wednesday, President Jonathan delivered the keynote address at the Commonwealth Business Forum on the theme: "Unleashing Africa's Potentials: A New Vision." Attended by a capacity crowd of over 2, 000, the event set the tone for subsequent deliberations at the Commonwealth Business Forum, and the President's presentation was well received.


“The President was not scheduled to deliver speeches at two events on Thursday as claimed. Rather, he was required to participate in another Business Forum: "Africa - Creating a New Economic Power for the 21st Century". It was agreed that the state Governors attending CHOGM should attend this event and use the opportunity to showcase trade and investment potentials in their various states. In this regard, the Governors of Ogun, Oyo, Kaduna, Akwa Ibom, Benue and Gombe states participated in the Forum, and in their various presentations, they further explored the themes contained in President Jonathan's keynote address. Similarly, President Jonathan asked the Minister of Mines and Steel Development to attend the Mining Roundtable.


“Before this, the President had held bilateral meetings with the Hon. Colin Barnett, MPA, Premier of Western Australia, the Prime Minister of Australia, Hon. Ms Julia Gillard, MP, and Governor-General of Australia, Hon. (Ms.) Quentin Bryce AC. In these meetings, trade relations between Australia and Nigeria were discussed with particular emphasis on mining and agriculture, and the establishment of an Australia-Nigeria Trade and Investment Council.


“The President also met with top Australian business leaders at the Royal Perth Yacht Club where he gave a speech on the mining sector in Nigeria. On the day in question, when you claimed the President failed to show up for scheduled events, he in fact attended the final session of the Commonwealth Business Forum, which came up immediately after the two events at which he was represented by the Governors and the Minister respectively and it was on this occasion that he gave his well reported speech on the need for an "African Infrastructure Fund".

“President Jonathan deserves commendation, not embarrassment, for the sense of duty, leadership, and commitment that he continues to demonstrate in bringing Nigeria "out of the woods" of international relations. His participation at CHOGM 2011 has been excellent, focused as it is on the promotion of trade and investment, bilateral relations, and private sector empowerment. It is unfair to accuse him in any way of dereliction of duty or "absence".

“Today, he had the honour of proposing the toast of the Commonwealth at a dinner hosted by Her Majesty, Queen Elizabeth II. He also participated in the opening ceremony and in executive retreat sessions. President Jonathan remains focused and determined to continue to do his best on behalf of the Nigerian people, in pursuit of the glory of the fatherland, and in honest fulfillment of his promise not to let the Nigerian people down.”