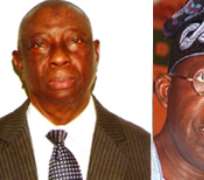 •Adeyinka &•Tinubu
Last Saturday, Lagos residents, who were eligible voters, went out to exercise their civic duties by voting for candidates of their choice as chairmen and councillors in their various council areas. RAZAQ BAMIDELE, who monitored the election, reports how apathy marred the exercise and whose door the blame was squarely placed

Pre-election permutations
While preparing for last Saturday's Local Government election in Lagos state, members of the ruling party, Action Congress of Nigeria (AC N), conducted massive campaigns that gave the impression that the turnout for the election would be massive.

Although, observers were of the view that the turnout at some of the campaign grounds was far from being impressive, party stakeholders were expressing optimism that house to house campaign would complement the outdoor ones to persuade the residents to come out enmasse.

Even, Governor Babatunde Raji Fashola (SAN), severally challenges the party supporters to give the ACN more votes than what he got during the governorship election last April.

'Do you remember you gave me more than 1.5 million votes last April? I am no longer impressed with that number. On Saturday, October 22, I want you to come out and give me at least 5 million out of the 6 million voters registered in Lagos state,' Fashola demanded from his ecstatic audience.

But the turnout last Saturday was a far cry from the 1.5 million votes of last April.

Apathy foreseen
However, political observers were not surprised at the turn of event on Saturday as even an electoral umpire had earlier expressed apprehension about what might likely happen on the election day.

LASIEC Chairman, Justice Abdulfatai Adeyinka (rtd), in a statement issued on his behalf by the LASIEC Corporate Affairs Manager, Mrs. Ronke  Famakinwa, has stated that there had been so much apathy towards council polls in Lagos state.

“We appeal to members of the Lagos House of Assembly to go back to their various constituencies to sensitize people of voting age to come out en-masse to participate in the October council polls. The success of any election depends largely on massive participation. Participation would reduce voter apathy'' Adeyinka stated.

Speaking in the same vein, a lawyer and LASIEC Commissioner in charge of Logistics and Administration of the council election, Musbau Oyefeso had asserted that 'the major challenge on our hand right now is voters' apathy.'

According to him, if INEC with all its huge spending 'could come out to tell us that it recorded 35 percent turnout in the last general election, then, we should be afraid and jittery as to what we are going to record.'

Oyefeso reminded that 'it is the duty of the political parties to do much mobilisation of the electorate hoping that they would rise up to their duties of massively mobilising the populace so that the election could have credibility with huge turnout.

The fears expressed above by the duo was confirmed last Saturday. Two members of the Civil Society Coalition for Mandate Participation (CSG-MAP), Kehinde Adegbuyi and Gbenga Soloki expressed shock over the poor turnout inspite of the level of awareness of the people.

Both Balogun and Soloki also observed that 'electoral officers and materials came late to some polling booths and thus disenfranchised some potential voters who walked away and never came back.

However, some voters said that they came out to vote because of Fashola and his performance, stating that 'we could not have come out to vote for the chairmen who are monumental failures.'

Buck passing
Trust politicians; they are not to be caught unawares in any situation without prompt reactions. When the former Lagos state governor, Asiwaju Bola Ahmed Tinubu surfaced at Alausa Ward F to cast his vote about 12.15pm, he fielded questions from newsmen who, expectedly laid ambush for him.

When asked to react to the low turn out, Tinubu, who is the National Leader of the AC N suspected two reasons for the apathy. He said 'it might be election fatigue of the last April election.'

But when abysmal performance of the council chairmen was mentioned, Tinubu quickly placed the blame of poor performance squarely on the door steps of the Federal government which he accused of taking over 50% of the nation's revenue for doing nothing.

Tinubu has an ally in the Speaker of the Lagos House of Assembly, Sabith Adeyemi Ikuforiji who also pointed accusing finger at the Federal Government.

Thrills and frills of the election
At Odi-Olowo Ward B-2, a cripple, Abiodun Alao, who walks on all four came to cast his vote to the admiration of the LASIEC officials and other onlookers.

At Alausa Ward F, Tinubu introduced a comic relief when he was reported to have stormed the polling booth without his voters card. He then took fancy to introduce himself as 'Asiwaju Bola Ahmed Tinubu, the National Leader of the Action Congress of Nigeria,' and he was accredited to vote when his picture and name were ascertained on the voters' register.

Earlier, the President-General of the Nigerian Market Women, Alhaja (Chief) Abibatu Asabi Mogaji, Tinubu;s mother, who clocked 95 on the election day was also brought to the polling centre in her Mecedese Benz car. Mama was accredited and assisted to vote while sitting in her car.

Intrigues and upsets
Expectedly, there were some attempts at using underhand manoeuvres to outsmart opponents. In Mende, Maryland, one of the Women Leaders of the Congress for Democratic Change (CPC), Lucy Ajayi complained that a chieftain of the AC N in the area attempted to stuff a ballot box illegally. 'But we are giving them close marking and resisting all their intrigues to rig,' the woman politician told Daily Sun on the phone.

There were also reported instances of thuggery and hooliganism in some areas that led to shooting and unconfirmed death.

However, the opposition parties, especially the peoples Democratic Party (PDP) that appeared initially as non-existent sprang some surprises in some Wards and Local Governments.

The most interesting aspect of that of Olorunda LG was that the Ward captured by the PDP is where the incumbent Chairman, Abudu Amada hails from.

This feat was said to have been possible because of the alleged imposition of candidates on the party by the AC N leadership.

In Kosofe, the Vice-Chairman, Segun Aka-Bashorun complained that he was the popular choice but was not given the ticket. It was suspected that, might be why, his supporters embarked on protest votes that gave the PDP the two councillorship seats.

And with this, one would not know what would happen to the Wards won by the opposition party going by Fashola's threat that 'I will stop ongoing projects in any Local Government or Wards won by the PDP. He wondered why those who opposed the creation of additional councils should benefit from the exercise.

Losers
Majorly, only about five political parties made visible appearance on the ballot papers out of 28 that signified intention to partake in the election. They were the AC N, PDP, CPC, All Progressives Grand Alliance (APGA), and Fresh Democratic Party (FDP).

But out of these, only PDP and the ACN were the parties of the day while others never made any appreciable impact.