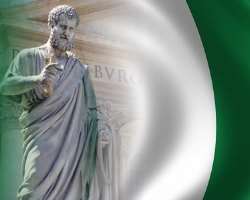 Dear beloved Nigerians: Almighty God has directed me to write this epistle to you because the news emanating from your country has continued to cause great scandal, shock and deep sadness in heaven. Why this epistle from heaven, and why now?

The answers have to do with recent events in the world, specifically the ouster of long-time Libyan dictator Muamar Gadhafi. For more than forty years, the international media dubbed Mr. Gadhafi “the strongman of Libya.” His words and fancies were law in his country. His eccentricities defined or shaped the Libyan people’s lives. When he was bored with decreeing what happened in Libya, he amused himself by dabbling in the affairs of other countries, mostly African. He broached no resistance, within Libya or in any of the African countries where he exported his military adventurism.

For several decades, the people of Libya seethed in silence under Gadhafi’s repression. But things changed last February. Thousands of Libyans, emboldened by the toppling of dictators in Tunisia and Egypt, launched their own effort to unseat Gadhafi. As the rebels seized key military assets and oil installations and made a daring assault to claim Tripoli, Mr. Gadhafi and his family waxed with the arrogance of denial. To Western reporters, the Libya henchman repeated the mantra, “My people, they love me. My people, they will die to protect me.”

On some level, he actually believed his own catechism. That was until his beloved people smoked him out of a drainage pipe where he cowered, and then used his own golden gun to dispatch him to eternity. I have soon to process his case – but first had to write and send this epistle.

Since Muamar Gadhafi’s ignominious death, millions of Nigerians have again been beseeching God to deliver them from the hands of their own oppressors, past and present. Of course, God, as usual, is appalled by your entreaties. The hosts of angels are consternated. That’s why I have been directed to remind you – since many of you seem to have forgotten a crucial lesson of the Libyan uprising a mere week after Gadhafi’s demise – that it was the people of Libya, not God, who dislodged the “strongman.” It was the bravery and sacrifice and determination of the Libyan people that turned Gadhafi, moments before his death, into a bloodied, scared, whimpering weakling.

God wants me to drum it into your ears that it’s not his place to “deal” with the few among you who have turned the Nigerian space into a metaphor for hell on earth for most of its citizens. The people of Somalia are stateless, besieged by horrific war and starvation, dying in their thousands. The people of Haiti are still devastated by the earthquake that shook their country two years ago. Hundreds of thousands of Japanese remain homeless from their own earthquake and tsunami. By contrast, Nigerians have been spared any major natural disaster. Why do you think God owes it to you to leave everything to rescue you from the yoke of a few men and women you allow to make a mess of your lives?

Each day, Nigerians and Nigerian newspapers wax praises for those Nigerian office holders who are certified frauds and derelicts. You call your embezzlers political icons. Instead of rejecting men and women who rigged themselves into office, you hail them as God-sent leaders. Instead of protesting against perpetrators of electoral fraud, you implore the real winners to accept their dispossession. You argue that to stand against the riggers is to overheat the polity. Your legislators don’t spend a moment enacting laws to improve your lives. Even so, you celebrate them with pompous names, calling some honorable members, others distinguished senators. In short, you gush with affection for those who waste your lives, squander your resources, and abort your hopes.

In America, where decades of prosperity have yielded to grim economic experience, hundreds of thousands are staging demonstrations by “occupying” different cities. These demonstrators are demanding that those who have raked in stupendous wealth through corporate greed ought to rein in their materialism and sacrifice for the common good. Whatever the flaws in their argument or defects in their strategies, they have sustained their cause with a combination of audacity and tenacity.

The last time a committee of angels did an audit, Nigeria had (by far) the highest number of churches, mosques, temples and shrines in the world. Despite this fact – or, in fact, largely because of it – your country has done more to mislead or dishearten believers and to give God a bad name than all the officially atheistic countries combined.

A few weeks ago, just before the 51st anniversary of your country’s Independence, your president, Goodluck Jonathan, set out to respond to critics who question his mettle as a leader. These critics have wondered whether Mr. Jonathan understands what leadership was all about. In response, the man submitted that there was no vacuum in the leadership of Nigeria. And then he went ahead to allege that God, not a mere mortal, was in charge!

It was a sad day in heaven the day Mr. Jonathan spoke those impious words. In fact, God immediately urged me to fully repudiate the sacrilegious claim. To say that God is running Nigeria is to associate God with failure and disaster. It is tantamount to giving God a scandalous image. It’s the kind of heresy that enrages heaven.

God wishes to reaffirm that Mr. Jonathan and his cohorts are fully in charge of running – or, more appropriately, mis-running – Nigeria. God has never stood election for the presidency of any country. He certainly wasn’t on the ballot in Nigeria’s presidential elections in April; Mr. Jonathan was. It follows, then, that Nigerians could not have elected God to be in charge of their affairs.

Past and present Nigerian leaders, from the president to the local government councilor, have specialized in the business of ruining lives and wasting opportunities. Look at the vast resources that are in the bowels of the Nigerian earth. What have the people done with them? As the Spanish would say, nada!

In most other countries, including China and Russia whose leaders hardly ever raise their hands in supplication to heaven, leaders spend a good deal of their waking hours thinking about how to improve the conditions of their people. They envision and implement strategies to create jobs, reduce poverty, improve healthcare, strengthen the educational sector, build or rehabilitate critical infrastructure – and give an increasing sense of pride to their citizens.

By contrast, Nigerian leaders are experts in all the wrong things. They think that their country’s woes can – and should – be tackled with speeches. Worse, these speeches are unimaginative, boring, and bereft of spirit and conviction. In 1999, the then Nigerian president said he was going to deliver the dividends of democracy. Other politicians, governors as well as local government chairpersons, descended on the phrase and began to use it with such promiscuous rampancy that it quickly became a cliché. Another phrase that Nigerian politicians have drained of any meaning is, “moving the nation forward.”

Week after week, the Nigerian leaders who proclaim the loudest that they are moving Nigeria forward are the exact ones who have put the nation in reverse gear. But nothing riles God and irritates the angels more than hearing Nigerian rulers (rulers is their more appropriate appellation, since most of them don’t know the first thing about leadership) state that God is in control.

At election time, these rulers maim, kill and intimidate their opponents – and then hijack mandates. They then turn around to say that God gave them victory. Does God engage in electoral fraud? Day after day, Nigerian rulers fatten their bank accounts and those of their cronies at the expense of the public. After stealing the public blind, these con artists posing as leaders proclaim their unearned wealth a sign that God has blessed them. Is God a robber, or a collaborator with robbers? Some so-called Christians among these executive thieves even have the effrontery to donate ten percent of their loot to unscrupulous pastors. Many of the so-called Muslims among the looters similarly seek out an imam to bribe, or even build private mosques with the proceeds of heists. Do they think, these contemptible looters, that it is possible to impress God with the proceeds of the most heinous of crimes, the dispossession of the most vulnerable in society? Do they imagine that God can be bribed?

Many of you Nigerians blame Satan for your country’s crises. But I have been instructed to tell you something you ought to know already, but often deny or ignore: the majority of your troubles are man-made, not Satan-caused, much less acts of God. Why, then, do many of you and your rulers belabor heaven, importuning God to come solve your problems? Has it ever been heard or seen that God built roads, swept streets, donned a judge’s robe to read a verdict, ran a classroom, put on a stethoscope or performed a surgery, dug boreholes, investigated corruption, chased down murderers? Now, if God has not done these things for any people, why do Nigerians disturb the serenity of heaven with petitions for divine intervention in matters that they, and they alone, ought to handle?

I must end with a statement that is neither in the Bible nor the Koran, but which applies to your situation. It goes: Heaven helps those who help themselves.