EXCLUSIVE: EVEN THE COURT SAYS SO… 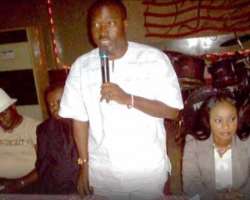 The call for justice by the entire membership of the ACTORS GUILD OF NIGERIA (AGN) which was accentuated by the esteemed Area Commander, Area C, Police Command, Iponri Lagos Mr. Bello Adullahi on Thursday 23rd of July 2009 who looking Mr. Ejike Asiegbu in the face told him that he is bringing the guild and the entire country to disrepute, and advised him to eat his pride and handover to Mr. Kananyo O. Kanayo immediately having exceeded his tenure by over two (2) years has received the blessing of the court.

On the 25th of July 2009, the Caretaker Committee of the Guild led by Mr. Kanayo O. Kanayo was ceremoniously ushered into the Guild's Secretariat in a seamless ceremony witnessed by excited members of the guild who are obviously appreciative of the new dawn in AGN.

On the 30th of July 2009, Obuesi Phillips Esq, counsel to the Board of Trustees of AGN delivered a CERTIFIED TRUE COPY of an order of the Federal High Court, Ikoyi, Lagos freezing the guild's account hitherto operated by Mr. Ejike Asiegbu In the said court order, the court properly informed of the realities and the demands of our esteemed GUILD referred to the last administration as “THE DEFENDANT (EJIKE ASIEGBU) AND MEMBERS OF HIS FORMER EXECUTIVE”. See page 2 of the attached court order

We, as concerned members of the guild hereby call on all stakeholders, friends of the guild and entire members of AGN, especially the state chapter chairmen whose names Ejike is presently peddling for legitimacy to join hands with the Board of Trustees and the Caretaker Committee to give the guild a push for vibrancy as the court order is indicative of the fact that the actions of Ejike Asiegbu and his former executive are illegal, uncouth, unjust and against civilized conduct.

In the meantime, the Kanayo O. Kanayo led Exco has released electoral timetable and guidelines which takes off with immediate effect with the announcement of the electoral committee members.

CONCERENED MEMBERS OF THE GUILD