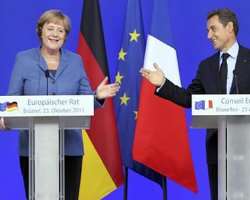 European Union leaders made some progress toward a strategy to fight the euro zone's sovereign debt crisis on Sunday, nearing agreement on bank recapitalization and on how to leverage their rescue fund to try to stop bond market contagion.

But final decisions were deferred until a second summit on Wednesday and sharp differences remain over the size of losses private holders of Greek government bonds will have to accept.

French President Nicolas Sarkozy backed down in the face of implacable German opposition to his desire to use unlimited European Central Bank funds to fight the crisis. Instead, the euro zone may turn to emerging economies such as China and Brazil for help in underpinning its sickly bond market.

"Further work is still needed and that is why we will take the decisions in the follow-up euro zone summit," European Council President Herman Van Rompuy said after chairing 12 hours of talks.

He indicated that Italy, the euro zone state now in the markets' firing line, had been told to come up with a more convincing plan this week to implement structural economic reforms to raise its growth potential.

"Between now and Wednesday, some members of the European Council will have to convince colleagues that their country is implementing the promised measures fully," Van Rompuy said.

Italian Prime Minister Silvio Berlusconi said he expected to call a cabinet meeting on Monday to discuss measures to boost growth, as Italy came under mounting pressure from European partners to step up reforms to restore market confidence.

Sarkozy acknowledged that France's proposal to multiply the firepower of the euro zone's rescue fund by turning it into a bank and letting it borrow from the ECB would not fly for now because neither Germany nor the central bank accepted it.

"No solution is viable if it doesn't have the support of all the European institutions," the French leader told a joint news conference with German Chancellor Angela Merkel.

Merkel said only two options remained on the table for leveraging the 440 billion euro ($600 billion) European Financial Stability Facility, and neither involved drawing on the central bank. Van Rompuy said, however, that some form of ECB involvement could not be entirely discounted.

Officials said the emerging solution would combine using the EFSF to provide partial guarantees to buyers of new Italian and Spanish bonds, while also creating a special purpose vehicle to attract funds from major emerging countries that could guarantee bonds in the secondary market.

It remains to be seen whether that will convince investors that euro zone government bonds are safe after expected heavy write-downs on Greek debt.

"This is not going to be the 'shock and awe' solution to really impress the markets given there are still a lot of details to be worked out and there is still a great deal of uncertainty about how this is to be implemented," WestLB rate strategist Michael Leister told Reuters.

Leaders endorsed a broad framework drafted by their finance ministers for recapitalising European banks, which regulators say need between 100 and 110 billion euros to cope with likely losses on Greek and other euro zone sovereign bonds.

WRANGLING
Much time was spent on procedural wrangling with non-euro members Britain and Poland demanding that all 27 EU states, including the 10 that are not in the single currency, be fully involved in the crisis response. That forced the calling of another full EU summit for one hour on Wednesday.

British Prime Minister David Cameron said there was a danger that euro zone countries would otherwise start taking decisions on their own that affect the EU's single market.

With alarm growing in Washington, Beijing and other capitals about potential damage to the global economy, Europe is under pressure to put in place a comprehensive strategy in time for a November 3-4 G20 summit in France to halt the crisis.

Merkel told reporters that the decisions to be taken on Wednesday would not be the last step to overcome the crisis.

Before then, she must obtain parliamentary approval from her fractious center-right coalition for the latest series of increasingly unpopular bailout measures.

Merkel and Sarkozy began the day with a 30-minute private meeting with Italian Prime Minister Silvio Berlusconi to ram home what a German official called "the urgent necessity of credible and concrete reform steps in euro area states."

LIFELINE
Finance ministers made progress at preparatory sessions on Friday and Saturday, agreeing to release an 8 billion euro ($11 billion) lifeline loan for Greece and to seek a far bigger write-down on Greek debt by private bondholders.

A document prepared by the ministers and seen by Reuters outlined possible guarantee schemes to help banks secure access to wholesale funding at a time when many are shut out of inter-bank lending.

The key outstanding issues were how to make Greece's debt burden manageable and how to scale up the rescue fund to shield Italy and Spain, the euro area's third and fourth largest economies, from bond market turmoil that has forced Greece, Ireland and Portugal into EU-IMF bailouts.

A debt sustainability study by international lenders showed that only losses of 50-60 percent for private bondholders would make Greek debt, forecast to reach 160 percent of GDP this year, sustainable in the long term.

"This debt is onerous and must lighten for us to breathe again," Greek Prime Minister George Papandreou told reporters.

A senior German banker close to the talks said the banks had offered to take a 40 percent "voluntary" writedown but governments were demanding they write off 60 percent.

This is much more than a 21 percent net present value loss agreed with investors on July 21 and some officials question whether it can be achieved voluntarily, or only through a forced default that would trigger wider market turmoil.

"It's a poker game until Wednesday," one negotiator said.

A Reuters poll of economists -- many of them from European banks -- showed last week they expected private investors would have to shoulder losses of around 50 percent.

Analysts say the proposed bond insurance scheme could have perverse effects and remove incentives for states like Italy to take action to reduce debt.

The European Banking Authority told European Union finance ministers on Saturday that if all such bank assets were valued at market prices, EU banks would need 100-110 billion euros of new capital to have a 9 percent core tier 1 capital ratio.

Ministers agreed to give banks until June 2012 to achieve this capital ratio, first using their own funds or from private investors, and if that fails, by using public money from governments or as a last resort the EFSF.

However, EU sources said that figure appeared to include some 46 billion euros already earmarked for bank support in the EU/IMF bailout programmes for Ireland, Greece and Portugal.

Markets may be disappointed if the actual capital injection is only 60-70 billion euros, compared to recent estimates of a need for up to 200 billion euros.