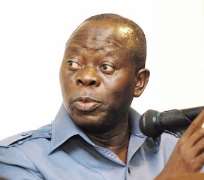 “Vicarious liability is a form of strict, secondary liability that arises under the common law doctrine of agency – respondeat superior – the responsibility of the superior for the acts of their subordinate.”

In this view, It’s rather ironic that Edo State Governor, Comrade Adams Oshiomhole has decided to disgrace and humiliate a fellow “Comrade” in a show of shame with political connotation as captured in a newscast video clip on 12 September, 2011 in Benin City while ordering the arrest of the Chairman of the State Task Force on illegal Structures, Major Lawrence Loye (rtd) who was handcuffed and thrown into a van like a cow taking to the abattoir for slaughter.

This action of the governor depicts double standard and deserves all condemnation as Major Lawrence Loye was already presumed guilty even before a competent court of law. Oshiomole cannot fume ignorance of Major Lawrence Loye’s action before now, because the state governor has once footed the bill for the re-construction of a perimeter fence belonging to the 4th Mechanized Brigade of the Nigeria Army on Okorotu Avenue in the government reservation Area demolished by the Loye led Task Force. Now he is alleged to have demolished the properties belonging to a two time former Governor’s wife and daughter that has caused this uproar.

What about the commoners properties demolished before now? Oshiomole’s show of shame is nothing but a political gimmick as election is around the corner and he is trying to whip up sympathy to be seen as the caring governor using somebody’s father and husband as a scapegoat.

Edo people should not be deceived by the antics of the governor as he is guilty under vicarious liability because, Major Lawrence Loye heads a committee constituted by the state government. The government should as a matter of fact commence the compensation of victims of the demolished properties in the metropolis.