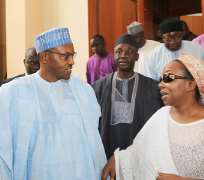 ABUJA, October 20, (THEWILL) – On a day the Presidential Election Tribunal deferred its ruling in the petition filed by the Congress for Progressive Change (CPC), challenging the victory of President Goodluck Ebele Jonathan in the April 16, 2011 Presidential election, the Presidential Candidate of the CPC, General Muhammadu Buhari and his running mate, Pastor Tunde Bakare were in court for the first time since the Tribunal opened.

Recall that the CPC had petitioned the Tribunal sitting in Abuja seeking to invalidate the victory of President Jonathan.

Chairman of the tribunal, Justice Kumai Akaahs in his address to the counsels at today’s session, said, “Judgment would be delivered on a date to be communicated to counsel.” Justice Akaahs expressed the Tribunal’s appreciation to the lawyers representing all the parties in the suit and cautioned journalists on their reporting.

The Tribunal also pardoned CPC’s Spokesman, Mr. Rotimi Fashakin who was alleged to have issued a contemptuous statement that maligned the integrity of the tribunal members.

However, before he was pardoned, Fashakin, through his lawyer, Mr. Femi Falana, had apologized to the judges for his offensive outburst.

Also in court were leaders of the CPC including its national chairman, Prince Tony Momoh.

Recall that Buhari had earlier been quoted to have said he would not bother challenging the victory of Jonathan in court, so journalists were a bit surprised to see him at Thursday’s sitting.

“The Presiding Justice reminded everybody in court that we do not have any other country except Nigeria. If you destroy our institutions, you are invariably destroying our country,” he said the judges told the audience.