100-YRS-OLD WOMAN, ANOTHER BURNT TO DEATH 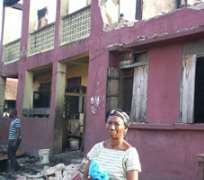 The death of a 100-year-old landlady, Mrs. Christiana Ugutanyin, in a fire incident in Ajegunle, Lagos, would have been prevented if electricity supply in the country was stable. The inferno also resulted in the death of one of her tenants, Mrs. Esane Aburimo while others, including a little boy, sustained injuries.

Eyewitnesses told the Daily Sun how the last floor of the one-storey building went up in flames,following power surge from the Power Holding Company of Nigeria (PHCN) facilities. Another possible reason for the death of the old woman was said to be the failure on the part of the Federal Fire Service and the Lagos State Fire and Safety Services to arrive the scene on time.

The inferno, which began at about 11.25 p.m lasted till about 3 a.m. It was later put off by officials of the Lagos State Fire and Safety Service.

But by the time the smoke cleared, the charred remains of the landlady was found. The old woman, who was restricted to a wheel chair was said to be sleeping in the bed when the fire started.

One of her relatives, Mrs. Meregwae Obiangwere, told the reporter that the deceased was also suffering from arthritis, and only moved from the floor to the bed. Sometimes, she would tell people to assist her. 'They would put her in the wheel chair and she rolled on the corridor.' The victim, who hailed from Sagbama Local Government Area of Bayelsa State, was said to have been married to a Camerounian, who died many years ago. The burnt building was said to have been built by her husband in 1946.

Another eyewitness, Muyiwa Olubukola, disclosed that another thing which led to the spread of the fire, was the fact that the ceiling was made of bamboo. 'Immediately the fire started, it was as if some one poured petrol on the building. Before anybody realised what was happening, the whole roof was on fire. Those, who were able to run, escaped, while those, especially, the two women, who were unable, were consumed by the inferno,' Olubukola said.

A grand child to Mrs. Aburimo, Pere, said he made efforts to have access to where his grandmother was sleeping, but to no avail. He said they could only weep as they made fruitless efforts to rescue the victims. The youths in the area almost went on rampage, when the officials of the Fire Service delayed to come after several phone calls.

They were so angry suchthat they wanted to attack the fire fighters, when they eventually arrived. It took the intervention of the Divisional Police Officer (DPO) of Ajegunle police station, Mr. Abayomi Agbana, and the Chairman of a vigilance group in the area, Ade Amusa, to pacify the restive youths.

That was after the fire fighters, who were prevented from bringing their equipment to scene, by the angry youths reversed their vehicle and drove to the police station, to complain about the attitude of the youths. Meanwhile, the injured persons, who were rushed to the hospital are said to be responding to treatment.