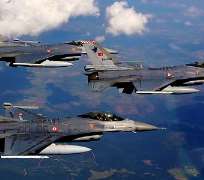 Turkey launched air and ground assaults on Kurdish militants in Iraq, vowing to exact "great revenge" after 24 Turkish soldiers were killed on Wednesday in one of the deadliest Kurdish attacks in years.

Turkish officials said about 100 fighters from the PKK, or the Kurdistan Workers Party, mounted simultaneous attacks under cover of darkness on seven remote army outposts in Hakkari province, on Turkey's rugged southeastern border with Iraq.

There was alarm, too, at the prospect of a major Turkish offensive across the border of a kind which had been mooted by Turkey for months before the latest sortie by Iraqi-based PKK fighters against isolated hillside forts defended by young Turkish conscripts scattered along the mountain frontier.

As U.S. forces prepare to quit Iraq this year, and Syria and Iran, also home to Kurdish minorities, deal with their own domestic tensions, another round of probably inconclusive blood-letting in the Kurds' heartlands may add to instability.

Public outrage poses a risk of a backlash against Kurds in Turkey and may hamper recent parliamentary efforts to answer Kurdish grievances. It may also put to pressure on Prime Minister Tayyip Erdogan to unleash the armed forces, whose high command he shook up in August to impose more civilian control.

Yet as winter snows approach, many doubt the second-biggest military in NATO can rout some 4,000 PKK fighters dug in at camps in Iraq, not least while Iraqi Kurds' own seasoned former guerrilla forces retain their ambivalence between solidarity with ethnic kin and building trade with a powerful neighbor.

Within hours of the attacks, in which 18 Turks were also wounded, some 500 Turkish commandos and other troops, some dropped by helicopter, were in "hot pursuit" up to 8 km (5 miles) across the Iraqi border and helicopter gunships and other aircraft were striking PKK bases on the Zab river, security sources in the regional center of Diyarbakir said.

At least 15 Kurdish militants were killed, they added.

"GREAT REVENGE"
Erdogan, calling off a trip to huddle with senior ministers and generals, said wide-ranging operations were under way.

In Washington, where Erdogan's quest for influence among fellow Muslim states has caused some unease, Obama offered clear support: "The United States will continue our strong cooperation with the Turkish government as it works to defeat the terrorist threat from the PKK and to bring peace, stability and prosperity to all the people of southeast Turkey," he said.

The PKK said in an Internet statement: "Our guerrillas carried out simultaneous attacks starting at 1 a.m. (2200 GMT) on regiments in the center of Cukurca district and at Bilican and surrounding military posts ... Nearly 100 soldiers and special forces police have been killed or wounded."

Many Kurds, however, have placed their hopes in talks with the government and have grown weary of violence.

Speaking to Reuters by telephone from the Turkish town of Cukurca, Kurdish accountant Mehmet Tek, 39, said: "It wasn't possible to sleep last night due to heavy gunfire.

"After hearing the news about the attack last night, we were devastated. Politicians need to do something urgently."

OCALAN ON TALKS
After three decades of conflict in which some 40,000 have been killed, the PKK, founded in the 1970s by the now captive Abdullah Ocalan, has dropped demands for a Kurdish state in favor of greater rights for Turkey's 15 million Kurds.

Erdogan's government has passed cultural and political reforms favoring ethnic Kurds, some 20 percent of the population, and aimed at ending a violence fed by grievances for which the Kurds have long enjoyed international sympathy.

The attacks on the border came as Ocalan, held in prison near Istanbul, had sent a message calling for renewed talks with Ankara. "Negotiations will continue and everything could change in the coming process if they open the door," the PKK quoted Ocalan as saying in its first message in months.

The government, however, has taken a harder line. Violence since July has killed more than 50 Turkish security personnel.

Ankara's recent step up in attacks on the PKK have fueled concern in Baghdad that Ankara is pushing its influence south, toward rich oil deposits around the Iraqi city of Kirkuk, just as U.S. forces which overthrew Saddam Hussein prepare to leave.

Masoud Barzani, the president of Iraqi Kurdistan and once a leader of guerrillas who fought Saddam's Iraqi forces with U.S. help, condemned the raids as a criminal act: "This action is first and foremost against the interests of the people of Kurdistan ... Violence and conflict are not a solution."

Iraqi officials in Baghdad say it is difficult for them to control the rugged area where PKK guerrillas have their camps. Turkish, Iraqi and U.S. officials meet often on security.

"It is possible that Erdogan will now seek to assuage public anger by ordering a land incursion against suspected PKK positions in northern Iraq. However, any land operation is likely to be short-lived and inflict only temporary damage on the PKK," said Wolfango Piccoli, an analyst at Eurasia group.

"The attack is also a serious blow to hopes of substantive negotiations between the government and Kurdish nationalists leading to the inclusion of measures to address Kurdish grievances in the draft of a new constitution."