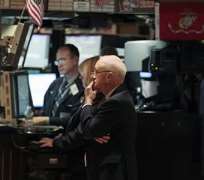 Stocks fell on Wednesday as traders, after sitting on their hands for most of the day, jumped to sell in a hair-trigger reaction to fresh reports underscoring that Europe remains far from a solution to its debt crisis.

In a repeat of a now-familiar pattern, traders capitalized on headlines emerging late in the trading day, this time to push the market lower. With long-term investors largely on the sideline due to Europe's uncertainty, the market remains susceptible to swift swings.

"The market has become overly sensitive to chatters and rumors out of Europe and to the headline news. This is exactly what happened yesterday and that just shows how unstable this market is," said Eric Marshall, director of research at Hodges Capital Management in Dallas.

France's President Nicholas Sarkozy said on Wednesday that talks to tackle the euro zone crisis were stuck as they struggled to increase the bailout fund's firepower, while a Wall Street Journal report said Europe's bailout fund could be used to provide collateral to back up bond issues by troubled countries. For details, see

A weak economic outlook from the U.S. Federal Reserve was responsible for the initial move lower on Wednesday afternoon.

Technology stocks were the biggest losers after a rare earnings miss from tech heavyweight Apple.

Apple shares (AAPL.O) fell below $400 after the company's revenue and profits came in below estimates for the first time in years on Tuesday as it sold far fewer iPhones than expected. The CBOE Volatility Index VIX .VIX, Wall Street's so-called fear gauge, jumped 10.1 percent to 34.76, reflecting market jitters ahead of a summit of European Union leaders Sunday. Investors hope the meeting will produce a concrete plan to handle the region's debt crisis.

On the upside, Intel Corp (INTC.O) hit a new 52-week high of $24.50 earlier after the chipmaker forecast quarterly revenue above expectations.

Earlier, economic data showed U.S. consumer prices outside food and energy rose at their slowest pace in six months while groundbreaking on new homes rose at the fastest rate in 1-1/2 years. Stocks barely budged after the data.

Trading volume was at 7.8 billion shares on the New York Stock Exchange, NYSE Amex and Nasdaq, lower than the year's daily average so far of about 8 billion.

On the NYSE, decliners beat advancers by a ratio of about 3 to 1. On the Nasdaq, about four stocks fell for every one that rose.