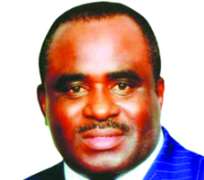 •Dr Orhii
The National Agency for Food and Drug Administration and Control, NAFDAC, the International Police, INTERPOL has began a total clampdown on owners of unregistered drug outlets, drug markets as well as drug hawkers in Nigeria and six West African countries. The countries are Ghana, Guinea, Burkina Faso, Togo, Cameroun, and Senegal

To this end, the group is establishing a rapid alert system between the countries for a possible network in the fight against counterfeit medicines and other substandard regulated products.

At a press conference in Lagos, the Director General of NAFDAC, Dr Paul Orhii disclosed that the team had successfully raided 375 premises, 200,000 pills seized and at least 1220 police cases opened in Nigeria.

Orhii also disclosed that the exercise will be a continuous activity with a goal to achieving a real transformation of the pharmaceutical distribution system to fall in line with best practices said the exercise would ensure that only safe and qualitative pharmaceutical products are available to all Nigerians and other members of the Nigerian society.

He said the activity expanded the national collaborative mechanism, bringing in the Pharmacist Council of Nigeria, The Nigeria Police Force, the Consumer Protection Council and the Nigeria Customs Service into the joint operations'

He added that the exercise became necessary as national efforts alone are not sufficient to deal with counterfeiters of fake medicines.

Giving insights on how the raid in Nigeria was done under 'Operation Cobra,' he said the first phase was raids on drug hawkers, while a simultaneous raid was carried out in different locations within Lagos metropolis, during which 30 suspects were arrested with their wares amounting to a 1X20ft container, valued at about N3,000,000, seized and awaiting destruction.

The second phase was on drug markets, where unauthorized kiosks and counters were dismantled at Idumota drug markets and Mushin areas of Lagos. In all, over 100 shops were screened at the two locations and some unregistered products were evacuated from the markets

The third phase was the screening of registered pharmaceutical outlets, distributors and drug warehouses. Based on intelligence received, he said some of the pharmacy shops, wholesale outlets and importers' warehouses were visited and TUSCAN was used to assess the quality of drugs found at these premises.

He lamented that so many donated drugs that were not meant for the Nigerian markets were discovered during the exercise. Some of the drugs are Septrin, Zestril, Inderal, Panadol, Canesten and investigations have since commenced to determine the source of the products.

Meanwhile, Director-General of NAFDAC, Dr-Paul Orhii last week received the coveted leadership Award from the New York-based the Youths for Human Rights International for his dogged commitment in the fight against fake and counterfeit drugs through the use of cutting-edge technologies.

Speaking as the Award ceremony attended by members of the YFHRI and Top flight Nigerian professionals in USA, the Co-ordinator of the organization Rev. John Carmichael said the NAFDAC boss was honoured 'for his exemplary Leadership in the global fight against drug counterfeiting through the introduction of cutting -edge technologies which has resulted in drastic reduction of fake and counterfeit drugs in Nigeria'.

Rev. Carmichael who presented the award on behalf of YFARI president, Dr. Mary Shuttle described drug counterfeiting as 'a global menace which should be fought by all nations'.

According to him, the devastating economic and health consequences of counterfeit drugs cannot be ignored by government and individuals with conscience.

His words' Dr. Orhii through his fight of this menace has increased access of Nigerians to good quality and efficacious medicines. He has contributed to securing the fundamental rights of his people to life and that is the connection between our organization and NAFDAC'.

Responding, Orhii thanked the Youths for Human Rights International for bestowing on him the rare honour and pledged to commit himself to the struggle.

He dedicated the award to the 'ever hardworking and dedicated NAFDAC who have toiled day and night at the risk of their lives to protect Nigerians'.