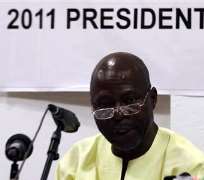 The row is the first sign of trouble in the West African state's presidential election, the second post-war ballot which is a key test of progress towards stability and its readiness for investment in untapped mining, agricultural and oil resources.

According to the latest results on Saturday, newly named Nobel Peace laureate Johnson-Sirleaf was leading with 44.6 percent of the votes, ahead of Winston Tubman of the CDC party, on 31.4 percent of some 950,000 valid votes counted.

Despite the lead, Johnson-Sirleaf remains short of the outright majority required for a first-round win. The election commission says results for about 80 percent of polling stations have come in.

"We declare the results being reported by the National Election Commission as fraud and are consequently declared null and void by all parties signatory to this release," the opposition said in a joint statement.

The statement, released before the latest batch of results were announced, had been signed by nine parties representing eight of the country's 14 presidential candidates, including Tubman and third-placed former rebel Prince Johnson.

But the head of Liberia's election commission rejected the allegations of fraud and said the vote would not be tarnished, even if the opposition parties withdrew their officials from the remainder of the counting process, as threatened.

"All the parties participated in the elections. The counting was done and both the local population and the international observers that came acclaimed the process to be free, fair and transparent."

An official from the Carter Center, an election watchdog, said they were aware of the opposition statement but they had not seen any evidence of fraud.

TROUBLE AHEAD?
Some 1.8 million Liberians registered to vote that was Liberia's first locally organised poll since an on-and-off 1989-2003 conflict, and if smooth could pave the way for billions of dollars in mining and oil investment.

A run-off will take place in early November if no candidate secures more than 50 percent.

The opposition party statement also said they would hold a peaceful rally on Sunday.

Earlier, the election commission called on parties to use legal channels to address complaints over the vote.

"We are concerned by the statements made by other political actors, but ... we are assured of the credibility, transparency and fairness of this election," Wilmot Paye, secretary general of Johnson-Sirleaf's Unity Party, told reporters.

Although Johnson-Sirleaf has been widely praised abroad for stabilising and starting to rebuild the country, critics say progress has been too slow and they regularly complain about poor infrastructure, the lack of services and rampant corruption.

Thousands of United Nations peacekeepers still play a key role in ensuring security as all forces were dissolved after conflict, during which all sides were accused of widespread rights abuses.

There was no immediate reaction in the streets of Monrovia but in an apparent sign of tensions surrounding the poll, a spokesman for the Unity Party said one of its offices had been set ablaze overnight.

Voting on Tuesday passed generally peacefully and no observer missions have flagged any serious irregularities in the process so far.