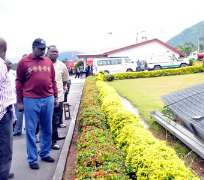 CALABAR, October 13, (THEWILL) - Aviation equipment at the Bebi Airstrip owned by the Cross River State Government is fully functional, up-to-date and of International standard to handle flights as well as ensure safety.

Governor Liyel Imoke of Cross River State disclosed this to newsmen shortly after inspecting facilities at the airstrip, explaining that he opted for additional state of the art facilities there, out of his own volition despite the fact that they were certified to meet aviation standards for an A-Class airstrip in the country.

The Governor, who was conducted round by his Special Adviser Tourism Development, Mr. Gabe Onah and the Commissioner for Works, Mr. Venatius Ikem, said the state decided to go a step further in order to complement the Instrument Landing System (ILS) and that the airstrip has been receiving flights for over ten years.

He further disclosed that the state government is installing complementary facilities like the Doppler Voice Omni-directional Receiver (DVOR), at the airstrip because of its importance as a core component of its tourism policy thrust as it is committed to get it beyond the standard of an airstrip.

On the patronage of the airstrip, Governor Imoke remarked that most business concerns as well as captains of industry prefer using the mountain resort for their Annual General meetings (AGM) and retreats, because they find the scenery to be exceptional and as such fly through the Airstrip, noting that he himself flies through there often.

Governor Imoke also disclosed that arrangements have been concluded with a constructions company CCECC to rehabilitate the deplorable Ikom-Obudu road before the 2011 Obudu International Mountain Race, reasoning that this is to ensure that athletes, officials and visitors to the race have a free ride to and from the venue.

The special Adviser Tourism Development, Mr. Gabe Onah, disclosed that the state has received tremendous support from the Federal Government with the supply of the Non-Directional Beacon (NDB) equipment, while the installation of the DVOR will be fully completed in the next three weeks.

Mr. Onah also commended the Federal Government for the provision of the fire-fighting vehicle stationed at the airstrip.

Areas also inspected include the 1.8 Kilometres run way of the airstrip as well as firefighting demonstration by men of the Federal Airport Authority of Nigeria (FAAN).