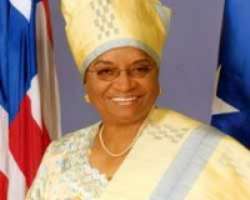 Johnson-Sirleaf confident of victory
I will be the winner, says Tubman
LIBERIA's legislative and presidential elections have ended with election officials, United Nations (UN) and international observers describing the exercise as peaceful as no violence was reported.

Meanwhile, the National Elections Commission (NEC) has warned against any attempt to disrupt counting of votes.

According to the NEC, the first results of Liberia's second post-war polls would be announced today, with newly Nobel-crowned incumbent, Ellen Johnson-Sirleaf facing a stiff challenge from former diplomat, Winston Tubman.

'Any unauthorised person that attempts to disrupt or interfere with the sorting and counting at polling places will be arrested and prosecuted in accordance with law,' Agence France Presse (AFP) quoted NEC Chairman, James Fromayan, as saying.

The UN Secretary General, Ban Ki-moon, has welcomed 'the smooth holding of the presidential and legislative elections in Liberia.'

His observations were echoed by the head of the 150-member Economic Community of West Africa (ECOWAS) delegation, Prof. Attahiru Jega.

'From the reports that we have received, the election has been peaceful and has been conducted in an orderly manner,' he told reporters.

Johnson-Sirleaf was jointly awarded the Nobel Peace Prize just days before Tuesday's vote, for her work in rebuilding the country and promoting women's rights after a savage 14-year war in which some 250,000 people were killed.

She faces stiff opposition from Tubman (70), a Harvard-trained lawyer and nephew of the country's longest serving president, William Tubman, who had said she did not deserve the prize.

Tubman, who had called Johnson-Sirleaf out on failed reconciliation efforts and shady ties to warlord-turned-president, Charles Taylor, asserted not much had changed for the average Liberian in a country where unemployment is around 80 per cent.

But Johnson-Sirleaf wants more time to continue rebuilding the 'broken country,' whose fragile democracy is facing a key test in the election, the first organised by Liberians themselves.

The 8,000-strong UN mission in Liberia is providing security back-up as the country prepares for the announcement of results, which has often proved to be the most edgy moment in recent African elections.

'We are still working on security with the Liberia National Police to ensure that the rest of the process goes smoothly,' UNMIL spokeswoman, Yasmina Bouziane, told AFP.

Ki-moon welcomed 'the smooth holding of the presidential and legislative elections in Liberia'.

'He commends the people of Liberia for exercising their right to vote in a calm and peaceful manner,' said his spokesman.

'This election is an important milestone in the efforts to consolidate peace and democracy in the country,' he added.

'The Secretary-General calls on the people of Liberia and all parties and candidates to preserve the existing peaceful atmosphere as the tallying of votes gets underway.'

International and local election observers said the election on Tuesday was peaceful, and there were no major breaches in voting and no serious incidences of violence.

Fromayan said the incident-free vote showed the country had matured to reach 'a new dimension where the Liberian people chose the ballot box over the barrel of a gun.'

The presidential candidates are assuring their supporters that they were sure of victory in the first round of voting.

The News Agency of Nigeria (NAN) reports that voters surged to the polling stations in the afternoon after hours of downpour.

Many of them had however defied the morning rains to cast their votes.   The Carter Centre, ECOWAS and AU Election Observers had said the turnout for the process was impressive in spite of the rain.

They had also urged the voters to accept the elections' results without resorting to violence.

Johnson-Sirleaf said she was sure of winning the election in the first round of voting.

She said her optimism was based on her performance in the last six years. 'I am very optimistic of winning,' Johnson-Sirleaf who is the presidential candidate of the Unity Party said.

Author of this article:  From Oghogho Obayuwana (Abuja) with agency reports