NIGERIA @ 51: HOW DRAMA, DANCE AND POETRY RULED THE SEASON 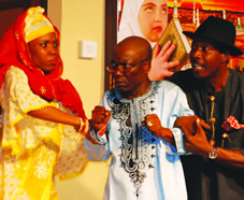 •A scene from Castles in the Air
Expectedly, artistes proved their mettle as worthy celebrators of Nigeria's 51st independence anniversary as they performed at different venues to mark the nation's birthday with their talents. It was a huge season of celebration for the artistes despite the low profile outing by the Federal Government to commemorate Nigeria's 51st year in FCT Abuja.

In Lagos, the independence anniversary train was set in motion by the National Troupe of Nigeria (NTN), which staged Akpaturo-Summary at the National Theatre. The show, which was choreographed by Arnold Udoka had six dance pieces commenting symbolically on Nigeria's social, political and cultural lives. The dancers made vocal statements on diverse issues of leadership, followership, environment, democracy and corruption, as they all affect the Nigerian nation.

Trailing the National Troupe's show on the Island was Castles in the Air, a play written by Barclays Anyakoroma but directed by Isreal Eboh and produced by Bikiya Graham Douglas at Terra Kulture, Lagos. The play explored various dramatic elements to advocate unity for all ethnic groups in the country just as it dramatized many factors, which have prevented the country from being a united nation.

Castles in the Air was Beeta Universal Foundation's way of reviving live theatre in Nigeria. It tells the story of two young lovers (Aminu and Stella) in a most intriguing manner. Coming from different cultural and linguistic backgrounds, both Aminu (Patrick Diabush) and Stella (Joy Princess Akrah) almost had their love sacrificed at the altar of ethnicity and monetary gratification.

Their parents, Alhaji (Haji Bello) and Chief (Soibifaa Dokubo) initially disapprove of the marriage on cultural grounds. But failure to secure the promised huge sum by Alhaji's friend in favour of the marriage further worsens the situation. The play ends up with a reversal of expectation as the two old men discover they have been building their 'castles in the air'.

WordSlam (Goethe Institut, Lagos)
Unlike Akpaturo Summary and Castle in the Air, that were staged by the National Troupe of Nigeria and Beeta Universal Arts Foundation respectively, this year's edition of WordSlam, a fiesta of poetry and lyrics held at Freedom Park courtesy of the Goethe Institut on Lagos Island. The show, unlike the previous edition held a competitive segment, which saw youthful Kemi Bakare emerging the young poet of the year.

The show was however boosted by Ben Tomoloju, the multi- talented artiste and cultural communicator who in addition to his popular song; Aja kubo, also teamed up with Yemi Oyewo to thrill the audience in diverse indigenous tunes. Other promising voices at the show include Edaoto, Habeeb Olatunde Ayodeji (Awoko), Aiyeola Mabiaku, Chuka Nnabuife, Uche Nwadinachi, among others.

Akpaturo-Summary (National Troupe of Nigeria)
Mostly created and choreographed by Arnold Udoka, the six dance pieces that make up this show tell the story of Nigeria in different forms. In The Arbiter, the audience encounter a selfish, ruling class that pretends to be saddled with the task of solving the people's problems. It presented the past and present leaders as hypocrites and ingrates who always steal what belongs to the masses. The dance features five dancers as town people and a fake messiah who always comes to steal their bananas and in the end, leave them in perpetual conflict.

The second dance, The Kid is a tribute to Nigeria's Hogan Bassey who did his country proud as a successful boxer. The dance expectedly celebrates courage and excellence, just as it portends a rare hunour for one of Nigeria's illustrious sons, who placed the country on the world's map through his vocation.

Black Skies is the third dance in which the choreographer examines the issue of religious crises and their effects on the citizenry. With a myriad of problems, Nigeria's unity is threatened by religious crises. Amid these pains and conflicts, Nigeria nevertheless remains a country struggling to survive.

As one of the longest dance pieces in the series, Ode to Earth mirrors how nature and the environment are threatened by all manner of factors. A dance drama which delves into the supernatural, Ode to Earth is a ritual tribute to mother earth which harbours man but to which man has done more harm. As the story progresses in choreographic steps, two female dancers are symbolically sacrificed ostensibly to appease the earth.

Rivers of Jubilation dramatizes the warped sense of administration in the Nigerian sports sector. It presents a satiric view of how corruption and injustice have ruled a sector, which is expected to unite the country and it's people. The dance synchronizes music with percussion to produce a rhythmic, yet comic performance.

The sixth dance entitled Kolanut is both symbolic and eclectic, it harmonizes certain values that make Nigeria a united entity. Here the various dancesteps and percussions from different cultural backgrounds are showcased as a demonstration of the country's diversity. Above all, Kolanut is presented in a highly creative dance that eulogizes it as a recipe for social, political and economic development. The show, which had a symbolic set of 51 oil barrels, was compered by Shaibu Hussein, with musical stints by the duo of Edaoto and Jo jo.