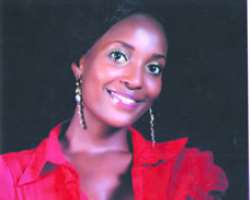 Olaide Olaogun is one of the faces of Nollywood and Wale Adenuga Productions that makes the difference in the entertainment industry in Nigeria. There is no doubt that she has made a mark. Olaide is from Lagos State. Those that watch Yoruba films, Super Story and television programmes, will instantly recognize her.

She is one of the presenters of Soul Sisters Show on television. She is elegant, humble, considerate and kindhearted. Above all, she looks like an angel. Olaide is from Lagos State and an English Language undergraduate of the University of Lagos. She reveals to Saturday Sun her person and her life style.

Background
I come from a family of three and I am the last-born. I am a Christian, a dedicated choir member of my church, the Baptist Church.

Growing up
My growing up was not tough and not too easy at the same time. But because I was still a child, my parents tried in providing my need. I didn't do things myself. My parents tried everything possible to make me comfortable. Not that I was born with a silver spoon but with God everything went on fine.

Acting
It is not quite long I started acting. I took off in 2004 after my secondary school. I hadn't gained admission into LASU then. I started with Super Story entitled, Omoye. I was the sub lead in the story.

Inspiration
When I was growing up, I can remember for sure I had a flair and zeal for having something to do with entertainment. Generally, when I was growing up, I became a member of the junior choir in my church. Not up to a year I joined the Sanctuary Choir, and became the Choir Mistress. I was also part of the drama group in my church. Then, we were going to churches for presentations, stage plays and all that. Nobody really inspired me. It was just an inbuilt something and passion.

Role models
I appreciate every actor and actress for every personal thing they do. I have something I love in every one of them. But there is only one person that I think I would really love to see one on one, sit down and share something with her. I will also like her to share something with me. She is Joke Sylvia. I haven't met her, but I know she is a mother and someone that interprets her job very well.

Rewarding profession
Well, yes, but one thing is that there is nothing you do that you will be definitely be comfortable with. The money can never be enough. It cannot get you everywhere. You cannot get the money to do everything you want to do in a particular place or job. You have to keep doing more things. Acting is a place and also foundation that has been set for anybody that feels he has the power, zeal and everything it takes to go into it. You can definitely pick your line from there. So, I believe it's a rewarding profession.

First experience on set
It was not as smooth as I thought. What led me into acting was funny. I was in my mother's shop on that day. As I put the television set on, they were doing Binta And Friends. In the process, they placed an advert and the only thing that gained my attention was Soap, I didn't see the Opera. I made up my mind to go for the auditioning. Unknown to me, it was not for soap like Lux or Tura. When I got there, I saw many girls and I was asking myself if it was the same soap thing. Where I sat down, I overheard some girls talking about how they would act when they got on stage. I felt I was in wrong place so I decided to ask. They told me it was a soap opera and I decided to try. After the auditioning, I was chosen. The experience was not smooth but with the help of the Director of Super Story, Uncle Antar Laniyan, he made it easy for me. He was really supportive. He considered it was my first time and decided to help me. Yet, it was not easy. When you start something, many mistakes will be made. You will mix up lines but all the same, I tried my best.

The most challenging role
There was this drama series we did for lux, in conjunction with Wale Adenuga Productions. It was really challenging. The character I played there was Adiola, a TV presenter, and then I knew nothing about presentation. I was just asking God how I was going to do it. The drama was just about the three stages of life; we started from secondary school girls, graduated to a university girl and to a working class lady. It was all about change and it was really challenging.

Works
I cannot remember all, but the one that brought me into limelight is also a Super Story entitled, A New Song. I acted Juliet, a girl who was brought to life by her mother and she started facing challenges. She suffered a lot from her stepmother and sisters. She was sent out of the house. She fell into the hands of bad boys. She was raped, introduced into drugs, went to jail and so on. After that, I could not walk on the streets. People were pointing at me, asking why they treated me the way they did. Even when I acted Omoye, people didn't notice. I have acted other films too.

Soul Sisters Show (SSS)
My colleagues and I thought that we needed something to give to the society. We thought of many things before we decided to build on the foundation Wale Adenuga and Lux laid. We didn't just want it to die. We noticed that when people model for a particular brand, after their reign, maybe for one year, you wont see them do something again. So, we decided to keep the foundation. We thought of so many things until we arrived at the Soul Sisters Show.

Love Roles
This does not bother me. In acting, one needs to interpret his or her roles very very well. If you also want your work to make sense to the viewers, you do your best. There is absolutely nothing wrong with hugging, kissing or romancing on stage. I can do it if it best suits my roles. I am into entertainment and I have to do my job for people out there to understand the message I am passing across. Nevertheless everything should be done moderately.

Aside Acting
I am into presentation. I used to do sound tracks for movies, which is what I am thinking of starting up again. I am a caterer. I do catering jobs. I sell ladies stuffs like shoes, handbags and clothes, though I have no shop. The business is mobile and I am also a student.

Ambition
By the grace of God, I am working hard to make money. I want to make a living for my family and the world especially the underprivileged. Honestly, I love children and I am focusing on them. I am really praying to God to see me through and also make a success of a foundation we just started. I hope to make it financially in order to support the underprivileged.

Relationship
I am not into any relationship yet until I see the right person. I will definitely go into one as soon as Mr. Right comes. Not that I don't have advances and admirations from men, but as a lady I want to be careful. I don't want to rush into a relationship because a guy is handsome or anything. There is a difference between dating and a relationship proper. I want to go into a long lasting relationship that will lead to marriage and not dating that will leave me devastated.

Coping with male admirers
Well, they come and they go. They are everywhere but I keep the ones I want and let go the ones that will not be useful. I just can't let all of them go because some of them could be useful in advising you about your business or even your career.

Sexual harassment
No, I have not been sexually harassed before. Everything depends on how you present yourself to men. Men who harass ladies or young girls look at them properly. Before a man can touch you, he already has a notion about you from your appearance, the way you talk and look. They themselves are intellectuals. They think before they make any move. One problem is that ladies at times look at men in a funny way that makes them begin to think of some things.

Likes and dislikes
I hate cheats, backstabbers, pretenders, liars and jealousy. I love honesty, friendship, travelling. Above all, I love God.

Regrets
So far, I don't have regrets and by the grace of God, I will not have.

Memorable day
My memorable days were the day I gained admission into the university and also the day I was invited to Unilever Plc and I became one of the three finalists.

Challenges
Challenges are many. There is a lot to handle and cope with. Most people that claim to be my friends are not, but I thank God for everything.

Word of encouragement
To my fans I say, aim high; don't think that something is too big for you. If you do, you won't get it. Don't ever give up; believe in the grace of God. Be prayerful and also share your dreams with people and the sky will be your limit.