PALESTINIAN STATE: HOW NIGERIA SHOULD VOTE AT THE UNITED NATIONS 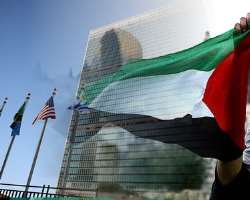 Negotiations are the preferred methods for reconciling differences. Insofar as the Israeli-Palestinian conflict goes, the fact is that this path has been travelled many times before, but to no avail. We know, for instance, that there was the Madrid Peace Conference (1991); the Oslo Accords (1993 & 95); the Camp David 2000 Summit; the Road Map for Peace 2002; the Geneva Initiative 2003; the Sharm el-Sheikh Summit of 2005; the 2006 Franco–Italian–Spanish Middle East Peace Plan; and the 2007 Annapolis Conference.

Historians and political scientists tells us that between 1919 and 2010, there been no fewer than 50 “Middle East peace proposals, peace agreements, and Arab-Israeli peace diplomacy and treaties” involving the Israelis and the Palestinians, and Israel and other Arab states. Ninety-two years later, what type of negotiations and agreements and accords are left to be explored? And for how long? The Nigerian vote at the United Nations, therefore, should be a resounding yes vote! Nigeria must not vote “No,” or abstain from voting. In other words, the Nigerian government should enthusiastically support the Palestinian bid: support and vote for their aspiration. This is the only vote that makes sense.

Even so, it seems that the Goodluck Jonathan administration is about to play monkey-game.

In the last couple of days, there have been two incongruous statements from Nigeria on how it would vote in regards to the quest for Palestinian statehood at the United Nations Security Council and/or at the UN General Assembly. The first statement seems hopeful and righteous; while the second statement seems deleterious and foolish. This is not the time for the Nigerian government to play games. President Jonathan should as soon as possible tell the country why he is about to do the honorable thing, or why he is committed to committing political suicide.

On September 28, 2011, the ThisDay newspaper (insofar as the Palestinian Question was concerned), quoted the Nigeria’s Foreign Affairs Minister, Mr. Olugbenga Ashiru, as saying that “It is a very simple question in the sense that it has always been the consistent policy of the government of Nigeria that we prefer a simple solution…whereby the two states -- Palestine and Israel -- live peacefully side by side. Not only that, since 1984, Nigeria has recognised the state of Palestine and in fact the ambassador of Palestine had been resident in Nigeria since 1984…So since 1984, we have recognised the state of Palestine. As far as I am concerned, our stand and policy is very clear and there is no change in our position.”

Two days later and in a blazing headline -- “Nigeria Won’t Disclose Voting Preference Yet in Palestinian Statehood Bid at the UN, Says FG” -- the Empowered Newswire quoted Abuja’s position thus: “Nigeria has already decided on who the nation will support when the issue of the Palestinian Statehood comes up for a vote at the United Nations Security Council, but that decision would not be made public until the Council calls for a vote.” Knowing this to be the case, why did Mr. Asiru make the earlier statement (which seems to unambiguously indicate that the government will vote in favour of the Palestinians). He need not make the first statement if indeed Nigeria wanted to keep its card to its chest.

As it is, Nigeria’s stated position confuses everyone – including the Palestinians and the Israelis since both sides seem to believe that they have fully secured Nigeria’s vote. Unless the Nigerian administration is waiting for the highest bidder, she need not act or make statements that seems to please both sides. Unless the government is engaged in, or intends to engage in political prostitution, she need not encourage both sides to court and count on her vote. Unless the Nigerian government wants to make silly her prestige and leadership position within the African continent, she need not swing false flags and false hope. And unless Nigeria is trading or about to trade her vote so as to please the United States, she need not tell the White House one thing, and then tell Mahmoud Abbas and the Palestinian National Authority, another thing. This is the time for courage and justice and steadfastness.

Jaja Anucha Wachuku, Arikpo Okoi, Joseph Nanven Garba, Ishaya Sha'aibu Audu, and Akinwande Bolaji Akinyemi were some of the past Foreign Ministers who exhibited courage and a sense of purposefulness when they were at the helm of Nigeria’s foreign policy. Is Mr. Olugbenga Ashiru (and his boss), going to be the exception? Whether under military regimes or civilian dispensations, Nigeria has always been very consistent and upright insofar as the country’s foreign policy was concerned. The pursuit of, and the support for people and countries in quest for independence and complete sovereignty, has always been part of our national ethos. Across the world, or across the African continent, we have never -- ever -- abandoned or betrayed justice-seeking people. This is not the time to start.

Fareed Zakaria, along with a tiny minority of voices in the world, seems to think that “now is not the time for independence or full membership at the United Nations.” Mr. Zakaria wants more and continued negotiations between the Israelis and the Palestinians. But of course, the Palestinians have always showed up at the negotiating table. And how have Tel Aviv, especially under Prime Minister Benjamin Netanyahu, rewarded the Palestinians? By appropriating their land and by building and expanding illegal settlements; and by turning brothers against brothers and children against parents. And even if the Palestinians were to return to the negotiating table -- with men and women like Benjamin Netanyahu – they would have to wait fifty or more years before statehood or full membership at the UN is accomplished.

And even if negotiation is a viable route, the Palestinians, at this point, have no trustworthy partner in the person of Mr. Netanyahu. Indeed, Thomas L. Friedman, one of America’s most brilliant minds and most celebrated journalist/author said it best when he wrote in the New York Times of September 17, 2011: “Mr. Netanyahu has a strategy: Do nothing vis-à-vis the Palestinians…that will require him to go against his base… Unfortunately, Israel today does not have a leader or a cabinet for such subtle diplomacy. One can only hope that the Israeli people will recognize this before this government plunges Israel into deeper global isolation and drags America along with it.” Netanyahu is not ready for peace.

At the recently concluded Clinton Global Initiative, former President Clinton was quoted as saying, “The Israelis always wanted two things that once it turned out they had, it didn't seem so appealing to Mr. Netanyahu. They wanted to believe they had a partner for peace in a Palestinian government, and there's no question -- and the Netanyahu government has said -- that this is the finest Palestinian government they've ever had in the West Bank.” In other word, “Prime Minister Benjamin Netanyahu is responsible for the inability to reach a peace deal that would end the conflict between Israel and the Palestinians.”

And on various occasions, Clinton -- one of Israel’s best friends -- noted that “The most pro-peace Israelis are the Arabs; second the Sabras, the Jewish Israelis that were born there; third, the Ashkenazi of long-standing, the European Jews who came there around the time of Israel's founding. The most anti-peace are the ultra-religious, who believe they're supposed to keep Judea and Samaria, and the settler groups, and what you might call the territorialists, the people who just showed up lately and they're not encumbered by the historical record.” Now, if you add the aforesaid to Benjamin Netanyahu’s character and worldview, how do you achieve peace through peace talks? With whom should the Palestinians negotiate?

Benjamin Netanyahu’s recent outing at the UN, and at various US media houses, was just a show, a digression, a ploy to dilute support for the people of Palestine. The time to support the Palestinians is now. The Israelis have the right to live in peace. The children of Israel have the inalienable right to all the rights and privileges accorded all children in Germany, Italy, Australia, France and elsewhere. And so too do the children of Palestine. The time for a Palestinian state is now.

*Sabella Abidde writes from Montgomery, Alabama. He can be reached at: [email protected]