I am not a militant – Timaya 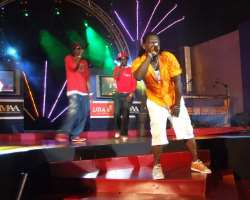 Though he is from the Niger-Delta area of Nigeria, Timaya decided not to go into militancy as many of his peers were doing in ... Bayelsa. He got his first break in music three years ago, and since then has been dropping hits after hits. Today, he is the favorite of many Nigerian youths. He also is an advocate of a militancy-free Niger-Delta

Why do you act so arrogant these days?

You have to get that arrogant, swagger look, you know, like my first album. I said Timaya dey hot like fire. So, when people see me, they see someone as cold as water and then they say, where is the fire? Sometimes, I just do it purposely, because I see myself as a small fortunate boy whom God has blessed and when the children see me, they keep shouting Timaya,Timaya, they won't know that I'm a small boy. But I don't allow people to ride me, I will give you that face and then you think this boy is tough. Then I'm also very playful that is why sometimes I just like to lock myself up because if I start playing with you now, I will forget myself.

What is really behind the name Timaya?

In recent time, there has been a particular thing that surrounded this issue of a 419 scam that happened in the North about a particular girl giving you a car, and paying some money into your account for you to feature in her music, and she said Timaya moved away with the money, and that time you were not around. What happened?

It is a normal thing for people to say things about you. I met the girl in Kano and there was a guy that was in my first album, Robert. Every transaction about that girl's song was dealt with by Robert not me, so maybe she gave him that money. I'm not saying she gave him, maybe she did, but she didn't give me any money. Really, the guy was meant to manage me because the first deal we had, that was my true story album, the guy messed up. I don't have anything to do with him anymore. Even if you check my first album today, you will see the guy's number there, but I don't work with him anymore. She got this guy's number through my CD pack, called him and said she wanted to speak with Timaya. The guy told her he was Timaya's manager. Somehow, they met and she started working with the guy and he didn't tell me at first that they were working together. It was later that he told me. She called me personally and said she wanted to do a collabo with me, but when I listened to her songs I didn't like them, and I did not work with her. Nobody has ever paid me for a collabo, not to talk of just N500,000.

There was an incident that happened recently. Some artist actually called me and said they wanted to do a collabo with you and they said how much do you think Timaya will collect from us. I was laughing and I said how much do you have? How much do you want to pay?, you are still hustling, when you are big enough, you wouldn't need him believing he is going to blow your album for you. I told them I can't get into the issue but have a good rapport with him and develop friendship with him. Then he will think over the situation himself and he will even pay you. There are a lot of people I can say, if I begin to mention names I know of some people in the society like Keffee. He will enter into the studio and ask me to help him do this job. So, if somebody is speaking up something like that, I don't know. When I heard the story, I was so shocked that I had to call him for explanation, and I was like, 'what is the meaning of all these rubbish? Who is bringing up all these? What do they want?' So I started receiving phone calls from my friends that they believe this is actually a lie, and I said it is a lie.

I don't believe people like that. When I heard the story, I brought her to my house, she took pictures with me, she is just my fan, just like every other fan. I have fans that call me every morning, girls, to tell me good morning, are you ok? Hope you are sleeping and resting? I have fans like that. But seriously I must tell you there is more to this story, which I don't know

How do you intend to take it up?

Taking what up? I'm not taking it up. Is it like fighting the unknown?

It was not really a treat, I said I was going to slap her the day I see her. It was a lie she was trying to pull up there. I'm not trying to form as if I'm a saint. I even went for this A.Y show, you can ask A.Y., Ali Baba was there. I was on stage, performing, I was dancing to my Yankulaya song, I now said I needed a girl to come out and dance with me. She came out herself nobody forced her, it was even Gbenga Adeyinka, the 1st that held up her hand, and she danced. Then when we were done, I left and the next day I just saw the paper, I called her and what pissed me off was that she said she didn't like something like that, that she didn't know about it and all that. I told her I didn't like what the press published, how can you hear a story like that and just publish it, at least you should confront me first, and you press are very funny, they will just call and say is it true you are having an affair with this person? They wouldn't even listen to you and then they will say you are sounding like it is true and hang up. The next day, you will see it published. I told her let's go to these people, because I have a girlfriend and both our names are at stake, she is a Yoruba actress not even in Nollywood

And what relationship do you have with .....

What about this story that she's pregnant?

She is not pregnant, she is London at the moment.

You seem to have had a lot of troubles, but I see you are a pleasant person compared to what I read about you. So, how would you describe yourself when you were not known?

Nothing really has changed, the only thing that has really changed is that I'm now fresh, I can afford three square meals and I can afford any other thing I want for myself by God's grace, I'm still down to earth and I still go to those “mama put”. I'm still a street boy.

What has stardom taken away from you?

Well ... Before, I used to go to “okrika” to buy clothes, but now I cannot. Sometimes, when I'm stuck in traffic, I feel like getting down from the car and taking a motorcycle down to wherever I'm going. I don't like obstacles and things don't bother me except that one about stealing money and I will never steal in my life. But really, something you did not do, will not bother you