Christie Still To Be Convinced Of 2012 Run: Source 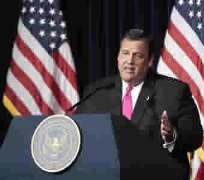 Republican Chris Christie is to decide within days whether to launch a late run for president and appears to still be leaning against it, Republicans familiar with his deliberations said Monday.

The New Jersey governor has been wrestling with whether to enter the race for the 2012 Republican presidential nomination.

Strong pressure from many donors and party activists concerned about the strength of the current field prompted Christie to reconsider previous vows not to run in 2012.

"He is thinking about it," the Republican said on condition of anonymity. "He did meet with the advisers this weekend. From the way it's characterized to me, he's still not planning to run unless they give him some kind of compelling argument."

A complication for a run at this stage would be the challenge of organizing a national campaign with the first U.S. nominating contests, the Iowa caucuses and New Hampshire primary, about three months away. The deadline for filing a formal candidacy in the early states is rapidly approaching.

"He and his advisers understand the timeline, that if he's not in the race by the end of this week, that it's not going to be possible to do this," the official said.

Another Republican familiar with the discussions said a decision could come in a day or two, and that he had been discussing whether to run with his wife. The New York Post said a decision was expected Wednesday.

Christie, who has a moderate record, would face a challenge in Iowa, where social conservatives dominate the Republican vote. Texas Governor Rick Perry and Michelle Bachmann are strong competitors in Iowa, whose caucuses may be held in the first week of January.

And in New Hampshire, whose primary will likely follow Iowa by about a week, and former Massachusetts Governor Mitt Romney has a fairly large lead in the polls in that state.

TIME IS SHORT
"The biggest problem is, in the time between now and a January primary, there isn't that much time for you to get an organization up and running and to start targeting voters," said Andy Smith, director of the University of New Hampshire Survey Center.

Also, he said, Christie would need a major fundraising burst in order to pay for a television advertising campaign to introduce himself to voters. Plus, most party activists have long since been absorbed by other candidates.

The tough-talking Christie is a rising star in Republican ranks and has a strong fiscal record that will appeal to Republicans and independents concerned about government spending and the $1.3 trillion U.S. deficit.

But in a sign of what he could expect in a campaign, Republican presidential candidate Herman Cain told Fox News Sunday that Christie is "too liberal" for conservatives.

Republicans think they have a good chance to capture the White House from Democratic President Barack Obama, who is struggling to restore U.S. job growth, but worry the field led by Romney, Perry and businessman Herman Cain lacks firepower.

Republican strategists differ on whether Christie has the time to launch a successful campaign.

"He would be a great candidate but with people going to vote in Iowa and New Hampshire in 90 to 100 days it's awfully late to be organizing a national campaign," said Charlie Black, who advised Senator John McCain's 2008 presidential campaign.

"He has to make a decision within the next week or so but there's time and it's not too late," he told Reuters Insider.

McKinney said Christie should realize the time is now.

"I'm sure that he's thinking about waiting and whether he should run in 2016 or later but the reality is that he's hot now and to be as hot as he is is very rare and it's not going to last," he said.