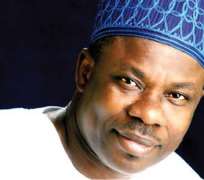 ABEOKUTA, OCTOBER 1, (THEWILL) - Governor of Ogun State, Senator Ibikunle Amosun, has urged all Nigerians to stand firm and defend the current civil rule, saying that democracy is about freedom, liberty, independence and prosperity. Governor Amosun acknowledged that the country was facing major challenges but cautioned that “a poor democracy can only be replaced by a better one,” as "the only alternative government recognised by the Constitution is within the party system.”

“We need to build and strengthen institutions of governance; deliver dividends of democracy; and reinforce people’s confidence in government. As it is often said, we do not need strong men; we need strong institutions that will outlive strong men,” he charged. “We must build an independent judiciary to strengthen the administration of justice in the country. We must strengthen our law enforcement agencies and public institutions, such that they serve the society and not individuals, no matter how highly placed.”

The governor urged Nigerians to demonstrate desire and commitment to genuine and practical attitudinal change, and implored politicians to play by the rules and show greater love for the country and respect its laws. He disclosed that Ogun State, under his administration, had started a rebuilding mission already yielding dividends. “We are determined to build a society with equal opportunities for all, to fulfil their potentials.”

He cautioned opinion moulders to be wary of comments that might suggest that the country could not be governed democratically. “There is no democratic country in the world without its challenges,” he added. “Our founding fathers at independence in 1960 bequeathed democracy to us as the compass to our greatness but the subversion of that led to monumental losses. Now that we have retraced our steps and accepted democracy as an article of faith, the greatness envisaged by our founding fathers is now within reach and attainment.”