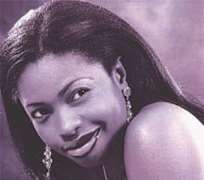 Few months after recording a resounding success with When The Heart Lies, leading female filmmaker and honcho of Purple Pine Productions, Vivian Ejike, is set again to hit the local and international movie scenes with another box office.

Entitled Silent Scandal, the thought provoking flick, according to cerebral Vivian, would be released on VCD and DVD soon in Nigeria, Europe, US and the rest of Africa.

The dramatic love story that revolves around the hidden and triangular love lives of a strict mother, her spoilt daughter and an indigent 'playboy,' has top actress, Genevieve Nnaji, as the lead act. Uche Jombo, Ebele Okaro, Ghanaian import –Michael Majid and a host of other emerging acts.

Shedding more light, pretty Ejike, who just returned from the UK where she went to tidy up some movie-related deals, disclosed that Silent Scandal was painstakingly shot with hi-tech production equipment and thoroughly manned by tested professionals within and outside Nigeria.

“It's a contemporary movie that will blow away the minds of movie buffs. It's also an emotional story, where a mother and her only daughter, unknowingly, are torn apart by the true love and lust of an indigent young man. Silent Scandal is full of intrigues and suspense from start-to-finish. With all sense of modesty, it's another plus for Nollywood, especially now that the nation is preaching the gospel of re-branding.

We believe so much in quality films and productions at Purple Pine and that is what this movie stands for,” disclosed Vivian, a former top banker.

The movie, which was directed by a Nigerian filmmaker based in Los Angeles, US, also featured a live Fashion Show by award winning designer, Zizi Cardow and her leggy models.

Gathered that Cardow's cameo appearance in the fast-paced movie was well applauded by the cast and crew.
Aside producing and financing the big budget project, Vivian, with over 13 years experience in Nollywood, also wrote and screen played the forthcoming movie.