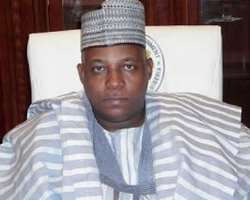 BORNO, SEPTEMBER 30, (THEWILL) – Deadly attacks from the notorious Boko Haram Islamic fundamentalist group will continue unless government embraces dialogue with the sect, according to the government of Borno State.

Governor Kashim Shettima of Borno State, speaking through his Commissioner for Information, Home Affairs and Culture, Mr. Inuwa Bwala, made the disclosure on Thursday, saying dialogue was “the only feasible option” of resolving the crisis. He indicated willingness to straightaway set machinery in motion to bring the group to the roundtable, despite the recent arrest of a commander of the sect by the Joint Task Force (JTF).

Shettima said that his government would not adopt the carrot-and-stick strategy of the federal government, but would employ sincere discussions, as recommended by Federal Government Committee on Security Challenges in the North-East. “The Borno State Government is sincere with its dialogue option and is taking time out to appeal to members of the sect to open their doors to dialogue,” he pleaded.