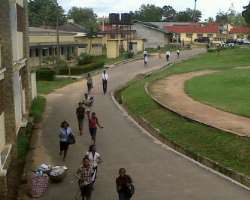 The serene Town of Iwo, Osun State was in Shock when armed men attacked a Bank inside the Campus of Bowen University early this morning killing one person.

The robbers reportedly shot dead a security man while looting the Bank's vault and carting away large sums of money. They fired several shoots as they escape with their loot, The gunshots frightened students and lecturers who scampered for safety, some of them getting injured in the process.

Police arrived the scene of the incidence moments later to discover numerous pellets of bullets. The School authorities is yet to issue a statement on the incident.