IHEJIRIKA: ONE YEAR AFTER, HOW FAR? 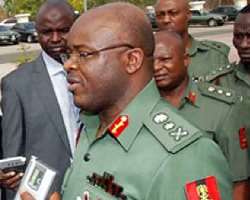 When in September 2010, he was sworn in as the Chief of Army Staff (COAS), Lt.Gen. Azubuike Onyeabor Ihejirika promised to transform the Nigerian army in order to meet the contemporary security challenges. Being the first Igbo man to head the army since 1966 when Major-General Johnson Aguiyi-Ironsi was the GOC of the Nigerian army, Ihejirika’s appointment was greeted with pomp and pageantry. But within the military circles, his appointment was largely seen as the triumph of merit and celebration of excellence in the Nigeria Army. Many commentators described him as a ‘gentleman officer’ and a thorough bred professional whose watchword is discipline and hard work.

Since Ihejirika took over toga of leadership at the Nigeria Army (NA), the country has witnessed series of security challenges necessitating the army chief to declare that the spate of violence across the country was internally induced. Of course he knew what he was talking about as the deadly religious sect, Boko Haram continuously claimed responsibility for incessant subsequent bomb blast. The sect has since killed and maimed many lives, destroyed properties running into billions of naira and brought the nation to ridicule in the comity of nations.

The Chief of Army Staff believes that in order to nip in the bud the menace of Boko Haram religious leaders must stop preaching inciting messages to their followers because such information is capable of causing disaffection, war and hatred among Nigerians. He has always reminded those sponsoring such violent acts to desist from it and embrace peace. According to him, since the army fought and paid the supreme price of keeping the nation one, it would not hesitate to do the same thing all over again if forced to, to save the country from individuals who he said were doing their uttermost best to tear the nation apart. This shows his sense of patriotism and extent of love for Nigeria.

As a professional soldier, the COAS has been opposed to calls for dialogue with the Boko Haram sect. He was quoted at an event for declaring that “Amnesty or no amnesty for any group is not really the concern for the army. For us, the issue is that people are being killed unnecessarily. People are committing crime for no just cause by whatever name they are called. That cannot be allowed to happen,” it is this proactive combat approach of the Army that led to the establishment of the task force “Operation Restore Order”, to tackle the Boko Haram crisis in Maiduguri and other states in the North. Of course, since the Army stepped into arena, there has been some level of respite.

Within the one year of his leadership, the Army has reopened the abandoned Ohafia barracks in Abia state. The establishment of the barracks in Ohafia became necessary as criminals in the area exploited the non military presence to entrench kidnapping and other related crimes. Before the re-establishment of the barracks, Abia and indeed the south east and south south part of the country had become a no-go-area and the police were rendered helpless until the Army came on the scene. The facilities and infrastructure available in the barracks are to accommodate 14 Brigade troops along with its garrison and other service supporting elements. Plans are already in the pipeline to bring on board other units that would be part of the newly established barracks to include 145 Battalion to be located at Ikot Umoh Essien, Akwa Ibom State, 144 Battalion, Umuma along Aba-Port Harcourt Road in Rivers State while an artillery regiment that would support the brigade during operations had been proposed to be established in Ebonyi State.

In order to tackle the emerging security challenge, the NA under Lt.Gen. Ihejirika has decided to undertake a transformation of the service. The training in the military has been modified. As a service chief under the administration of President Goodluck Jonathan who is an apostle of transformation agenda, it is not surprising that the COAS has wholeheartedly embraced transformation and is driving the army along that line. He has repositioned the army and it is now better placed to face contemporary security challenges and fit into the democratic setting, which has been firmly entrenched in the country.

The NA under Ihejirika has continued its excellent showing in the international circles in the area of peace keeping. In the past one year, there has been no report of our soldiers who are on peace keeping misbehaving and getting involved in embarrassing and criminal activities such as rape of women and torture of the weak.

The COAS has instilled discipline in the service and constantly decried inter-service rivalry. This is exemplified in the manner he dispatched the case in Lagos resulting in the killing of the Divisional Police Officer (DPO) in charge of Ibereko, Badagry, Lagos, Mr. Samuel Salihu, and two other officers in the area.

Former commander 33 Artillery Brigade, Bauchi, Brigadier General Raji Muraina was court marshaled over the escape of Boko Haram suspects in the Brigade’s facilities under questionable circumstances. In Lagos, a soldier was dismissed for driving on the BRT lane. All these actions were taken to restore the image of the military. Most importantly, the COAS has established two standing Court Martial’s for the North and South to ascertained the culpability of officers and soldiers.

In the face of the security challenges, the Nigeria Army under Ihejirika has remained resolute and committed to maintaining the territorial integrity of the borders as well as keeping the nation one and democracy intact. Today, it is no longer in doubt that the Nigeria Army is more than ever before committed to its constitutional responsibilities. There has been no mutiny of whatever nature since Gen. Ihejirika assumed duty in the past one year; neither has there been any form of dissent. It is therefore not out of place to state that Ihejirika has lived up to expectations and Nigerians are proud of his leadership. With this kind of leadership, the Nigeria Army is surely poised to help nurture and protect our democracy to maturity.